A smartphone's display is unquestionably one of its most important aspects, and failing to deliver a good display can be a fatal flaw for a device. If the screen doesn't have sufficiently high brightness and contrast then its usability with high ambient lighting will be severely crippled. Inaccurate color rendition will cause photos and videos that are taken and viewed on the device to look radically different from other devices. Pushing a wide color gamut can also have ramifications that go beyond making the display inaccurate, such as reducing battery life on AMOLED devices by having to drive a higher voltage in order to achieve the wider gamut.

Last year's Nexus 6 ended up being a significant disappointment as far as the display was concerned. It was immediately obvious to me that the gamut was far too large, and that peak brightness was too low. My testing confirmed both of these things, and I was disappointed mainly because the Nexus 5 from the previous year sold for significantly less than the Nexus 6, and sported imperfect but relatively good display calibration. While this year's Nexus 6P is an AMOLED display that we are yet to test, the Nexus 5X sports an IPS LCD like its predecessor. At 5.2", this year the display is a bit bigger than the 4.95" Nexus 5, but it's still a far cry from the 5.96" display that was on the Nexus 6.

To analyze the quality of the Nexus 5's display I've run it through our standard display testing suite. As always, displays are calibrated to 200nits of brightness, and results are measured with an i1Pro 2 spectrophotometer, and managed using SpectraCal's CalMAN 5 software. Contrast measurements are done with an i1Display Pro colorimeter due to the i1Pro 2's more limited accuracy with very low brightness levels.

The most basic data point to examine when moving beyond resolution is a display's maximum brightness and its contrast ratio. The Nexus 5X does very well here, with a peak brightness of 486 nits, and a minimum black level of 0.32 nits, which leads to a contrast ratio of 1479:1. This is the result of the use of photo-alignment to influence subpixel orientations and reduce light leakage, which results in deeper blacks and thus a higher contrast ratio. While many other LCD-based smartphones are also using this technology, to see it applied to a $379 smartphone is very exciting. The display's maximum brightness is also a healthy improvement over the Nexus 5, and I haven't run into any situations where the display can't get bright enough to counter glare from the cover glass.

Something that doesn't really show up in any of our figures is the visibility of the display's capacitive sensors. On the Nexus 5 these were fairly noticeable when there was any light shining on the display, and this is unchanged on the Nexus 5X. This is something that can be observed on every device with capacitive touch, although on AMOLED devices and iPhones it's extremely hard to see. I only felt it was worth pointing out because it does seem more pronounced on the Nexus 5X than some of the other devices I have.

Greyscale accuracy on the Nexus 5 is impeccable. Gamma does tend slightly upward as one moves past the 20% mark, but it's still quite accurate and most greyscale errors are approaching the point where the human eye could not even distinguish them from their reference colors when placed side by side. The RGB component balance for each shade of grey is also very good, and the display's average white point is only ever so slightly above the targeted 6504K. There's not much more to say, as this level of calibration is exceptional for a device of this price. The Nexus 5 certainly had fairly good calibration, but issues with the gamma made the display appear washed out which was a common complaint, and the Nexus 5X resolves that while also boosting accuracy significantly. 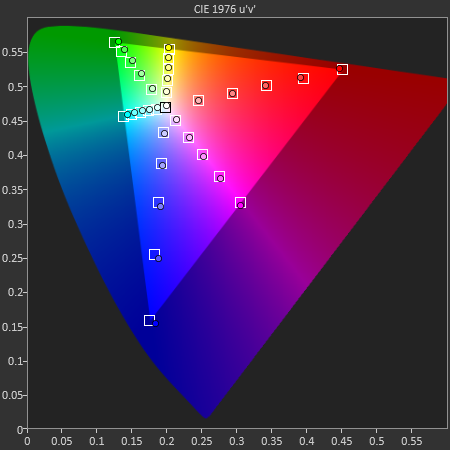 The accuracy for 20% saturation steps on the Nexus 5X is also incredibly high. It's actually the lowest DeltaE on record for a smartphone - lower than even the Galaxy Note5 and iPhone 6s - and there's honestly nothing at all that I could criticize about the rendition of primary and secondary colors on the display. The chart above also shows how much improvement has been made compared to the Nexus 5 and Nexus 6, with the latter being especially bad due to its overly wide gamut. 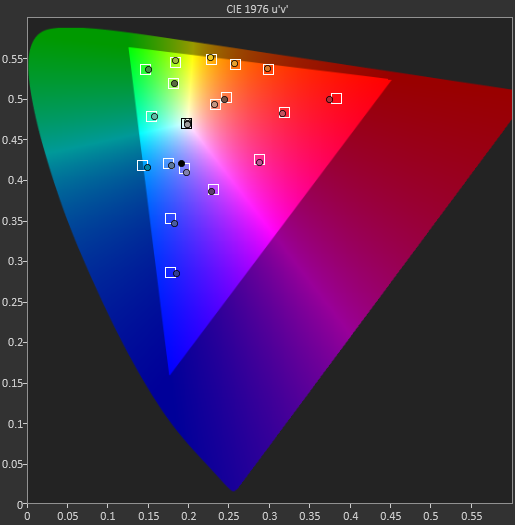 Once again the Nexus 5X provides an incredibly high level of accuracy, with color mixtures being reproduced almost as accurately as primary and secondary colors. It's not the absolute best result on record due to the Mi Note Pro's even higher level of accuracy, but you would only be able to tell that the rendition is wrong if you had the color right beside the reference color with absolutely no motion occurring, and that's well beyond the level of accuracy that is really necessary for a mobile device.

I really don't know what else to say about the Nexus 5X's display, because there's really nothing that can be criticized. I would certainly like if the brightness went up to 600 nits, but I would also prefer that it went to 6000 nits, and obviously that's asking a bit much. As far as LCDs go, the Nexus 5X has one of the best, if not the best that I've seen to date. At this point Google and their OEM partners are going to have to look to gamut as a vector of improvement, but only after proper color management is available at the OS level in order to avoid the problems that have plagued wider gamut displays, which have lacked suitable color management to properly map sRGB content into the wider color space.