In order to test the quality and consistency of a keyboard, we are using a texture analyser that is programmed to measure and display the actuation force of the standard keyboard keys. By measuring the actuation force of every key, the quality and consistency of the keyboard can be quantified. It can also reveal design issues, such as the larger keys being far softer to press than the main keys of the keyboard. The actuation force is measured in 'centinewton' (cN), or hundredths of a newton. Some companies use another figure, gram-force (gf). The conversion formula is 1 cN = 1.02 gf (i.e. they are about the same). A high quality keyboard should be as consistent as possible, with an average actuation force as near to the manufacturer's specs as possible and a disparity of less than ±10%. Greater differences are likely to be perceptible by users.

The machine we use for our testing is accurate enough to provide readings with a resolution of 0.1 cN. For wider keys (e.g. Enter, Space Bar, etc.), the measurement is taking place at the center of the key, right above the switch. Note that large keys generally have a lower actuation force even if the actuation point is at the dead center of the key. This is natural, as the size and weight of the keycap reduces the required actuation force. For this reason, we do display the force required to actuate every key but we only use the results of the typical sized keys for our consistency calculations. Still, very low figures on medium sized keys, such as the Shift and Enter keys reveal design issues and can easily be perceptible by the user.

We should start by clarifying that you should not directly compare the above results to a mechanical keyboard. The chiclet keys of the DeathStalker Chroma have a travel distance of just 2 mm and their maximum force point is at the very top of this distance. Furthermore, their performance and feeling are entirely different in comparison to mechanical keys. We performed the above testing to showcase the difference between chiclet and mechanical keys, as well as for future comparisons.

The chiclet keys of the DeathStalker Chroma are terribly consistent, with a disparity of just ±1.89%. Their average actuation force is 62 cN, which is relatively high for chiclet keys, but it also offers a feeling of firmness and precision. Unlike with mechanical keyboards, the actuation force of the larger keys (Space, Shift, Enter, etc.) is very close to that of the main keys. That is because the low profile keycaps have minimal weight and the travel distance is very short, which impede the weight of the keycap and or its momentum from assisting the actuation of the key. Technically, the actuation force difference between all keys is minimal and impossible to be perceived by touch.

The DeathStalker Chroma requires the use of Razer's Synapse software in order to access its advanced features, such as key programming, profiles and lighting adjustments. Over a year ago, when we reviewed the BlackWidow Ultimate, the software was effective enough for that particular keyboard and it showed a lot of promise. However it would seem that the software has not evolved much during the past year, despite Razer's competition that has been working wonders with their own. Furthermore, the software requires the signup for a Razer Synapse account that involves email validation. One cannot simply download the software/drivers, install them and be done with it. It does have benefits, such as the saving of the programmed profiles to the cloud, but many feel that it intrudes their privacy. This has received the negative criticism of many users.

Perhaps the primary selling feature of the DeathStalker Chroma is that it is a fully programmable keyboard. However, the keyboard has no keys dedicated to profile switching, macros and or other advanced functions. Thus, it is of critical importance that the software can recognize the launch of applications/games and switch to a pre-programmed profile automatically. As the DeathStalker Chroma has no extra keys, the functions of the main keys have to be reprogrammed to offer in-game functions and macros. The Razer Synapse software does offer this feature and it works seamlessly. All of the keys can be reassigned to perform other functions than their standard intended purpose, from simple layout changes and mouse commands to complex macros and external software launches. However, if profile switching within a game is required, at least one key needs to be sacrificed and reprogrammed to cycle through profiles. This is required with online games, where repurposing the main keys of the keyboard will likely make the user unable to type text and chat with others. 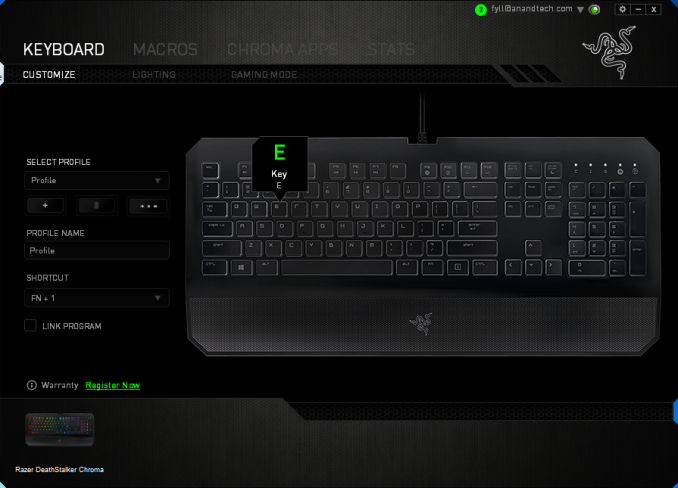 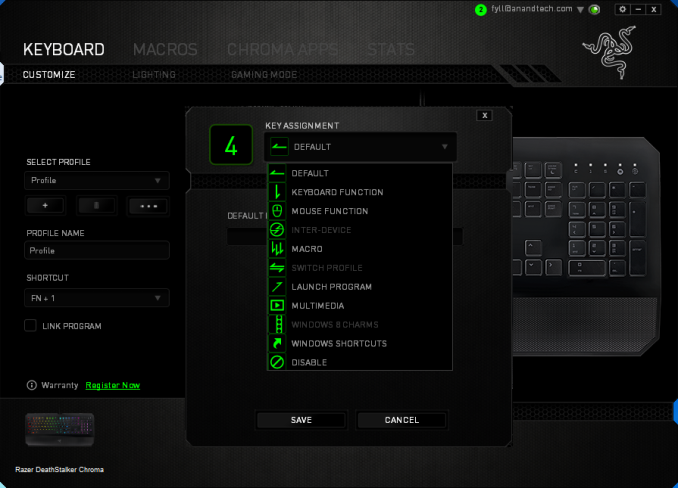 While the Razer software has basic macro usage covered, users looking for more advanced control are going to come away disappointed. The macro recorder is severely outdated and limited, with the ability to record only keyboard keystrokes and delays. These are editable after the recording but only individually and other commands cannot be inserted manually. It cannot record mouse functions at all, let alone absolute on screen coordinates and more complex actions. By all means, this level of macro programming is not going to satisfy most advanced users, who will most definitely resort to third-party software for that. 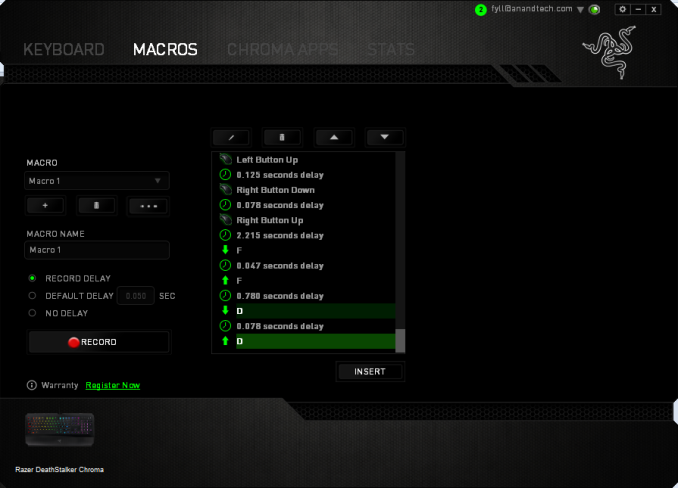 Basic lighting effects can be programmed to each profile through the "Lighting" tab of the software. RGB programming requires to bring up the "Chroma Configurator", which brings up more advanced lighting programming options. The RGB configuration of the DeathStalker Chroma is forcefully reduced to three layers and per-key configuration is not possible. Each of the three layers can be programmed to a different color and or lighting effect, such as "breathing" or "cycling", but the brightness of all layers is universal. The software allows the user to pick any of the 16.8 million colors of the RGB scale, but we feel that the eight pre-programmed base colors will be more than enough for the vast majority of users. 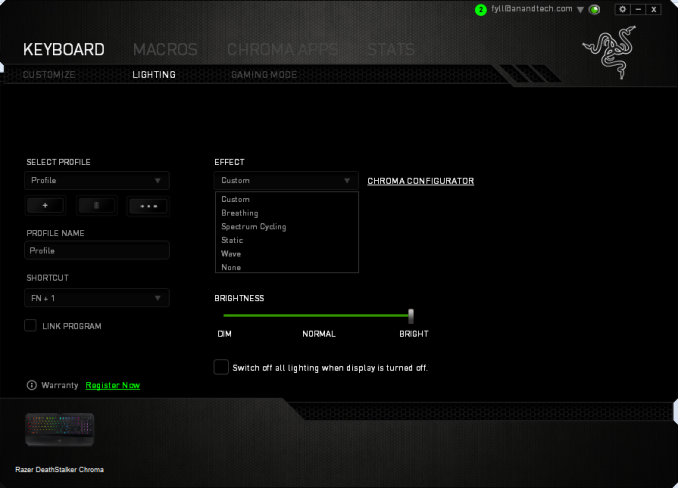 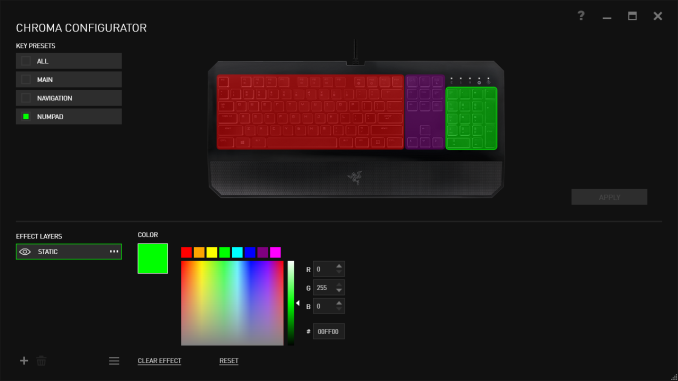 Razer also included a feature called "Chroma Apps", where specific games and applications can interface with the Synapse software and provide customized lighting effects. Supported games, applications and profiles can be found at Razer's Workshop. The list is still very small, but it should grow over time. 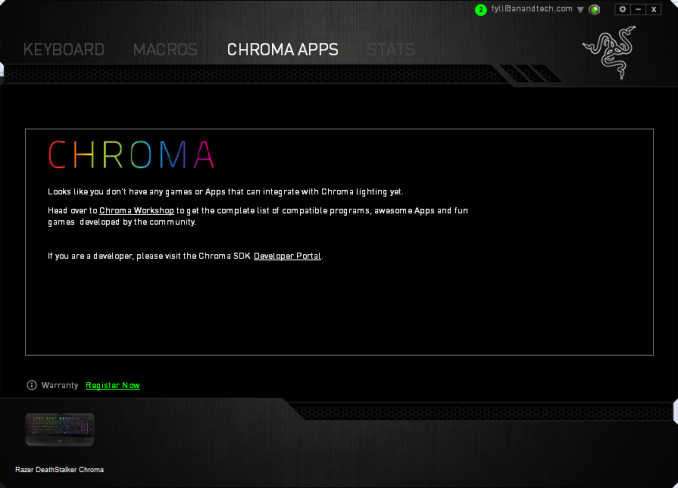 Finally, the last tab hosts a recorder of usage statistics. By default, all recording is disabled. If enabled, the users can check how many keystrokes have performed, the travel distance of all these keystrokes, the number of profile switches and macros. The results can be filtered for individual games and time periods. It is not a functionally important feature, but it is fun. 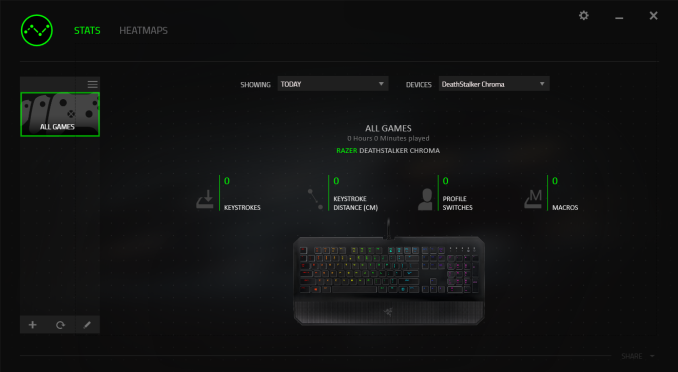