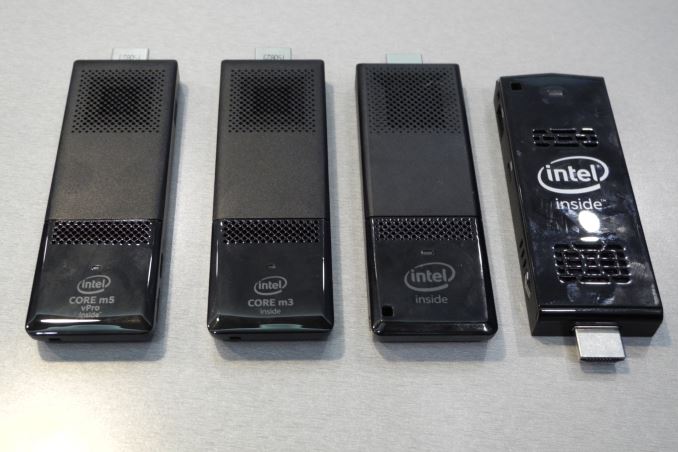 The desktop PC market is seeing growth only in two areas - the gaming high-end and the mini-PCs (in the NUC form factor). Intel has been strengthening its offerings in the latter space as a system vendor. The NUC has been extremely popular and Intel's partners such as Zotac and GIGABYTE are also enjoying a lot of success with similarly sized systems.

ARM SoC vendors started the trend of HDMI sticks, but Intel joined the game in CES 2015 with the Bay Trail Compute Stick. The first iteration was, to put it kindly, a bit underwhelming, but Intel showed its commitment to the form factor by announcing three new Compute Stick models at CES 2016.

This is a straight-on follow-up to the Bay Trail model from last year. The I/O ports and hardware construction are similar, except that the Cherry Trail model is slightly longer and includes a USB 3.0 port in addition to the previously existing single USB 2.0 port. 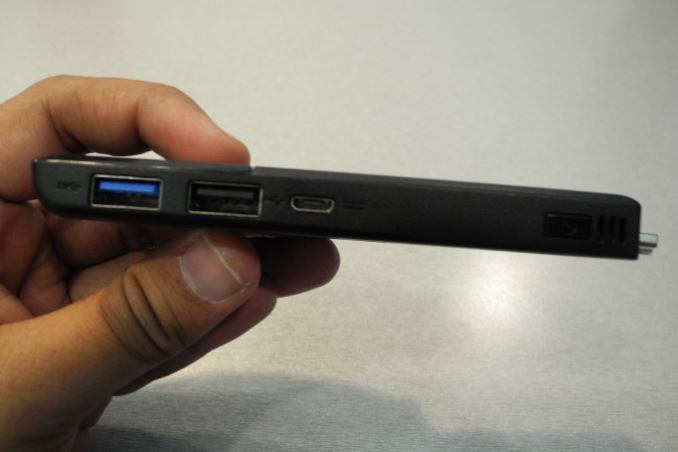 Other improved aspects include the use of Intel's own 802.11ac Wi-Fi chipset instead of the Realtek one found in the Bay Trail version. Obviously, Cherry Trail's GPU is better than Bay Trail's. However, the cooling fan still remains part of the hardware. The eMMC capacity is only 32GB and the RAM is only 2GB - two aspects that have an artificial limitation imposed on them by Intel's decision to pre-install Windows 10 Home. Even though the information is not public, it is likely that Microsoft mandates neutering of a PC's hardware specifications in exchange for a lower price for the Windows 10 OEM license.

While the Cherry Trail Compute Stick was more or less expected, the Core M-based Compute Sticks were a real surprise. Later this year, Intel will launch two Compute Stick models with a Core m3 and Core m5 vPro configuration respectively. The OS will not be pre-installed, and this means that we don't need the storage or RAM to be limited by anything other than what the hardware design allows. In terms of available ports, the design retains the microSD slot from the other Compute Stick models. However, there is only one USB 3.0 port on the unit itself. Power to the unit is delivered by a USB Type-C connector. 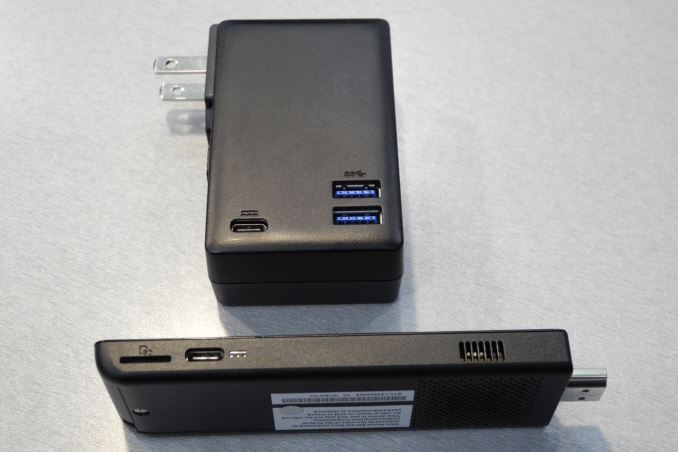 The USB Type-C power adapter also includes two USB 3.0 ports. This is a very novel use of the USB Type-C power delivery mechanism. Intel mainly expects the Core M Compute Sticks to be popular amongst businesses and enterprises (thanks to the availability of vPro).

Intel has been shipping the Skylake NUCs for a couple of months now. They had one on display at their booth. Interesting aspects include the presence of a SDXC slot as well as a full-sized HDMI port in the rear panel.

They also talked about the upcoming 'Skull Canyon' mini-PC featuring a 45W TDP Skylake H CPU with Iris Pro graphics. It will not be in the NUC form factor, but will be a slightly larger rectangle with height similar to the current NUCs which don't support 2.5" drives. The unit is still a work in progress, but we expect it to launch in the second half of this year. Unfortunately, Intel didn't allow us to take photographs of the Skull Canyon mini-PC.

On the whole, Intel is showing strong commitment to the mini-PC market segment. This will keep x86 relevant in the home computing space even as ARM continues to strengthen its hold in mobile computing.