If you live by the workstation, you die by the performance. When it comes to processing data, throughput is key: the more a user can do, the more projects are accomplished, and the more contracts can be completed. This means that workstation users are often compute bound, and like to throw resources at the problem, be it cores, memory, storage, or graphics acceleration. AMD’s latest foray into the mix is its second generation Threadripper product, also known as Threadripper 2, which breaks the old limit on cores and pricing: the 2990WX gives 32 cores and 64 threads for only $1799. There is also the 2950X, with 16 cores and 32 threads, for a new low of $849. We tested them both. 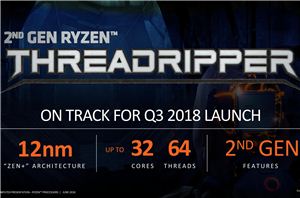 One of the surprises from AMD’s first year of the newest x86 Zen architecture was the launch of the Threadripper platform. Despite the mainstream Ryzen processors already taking a...