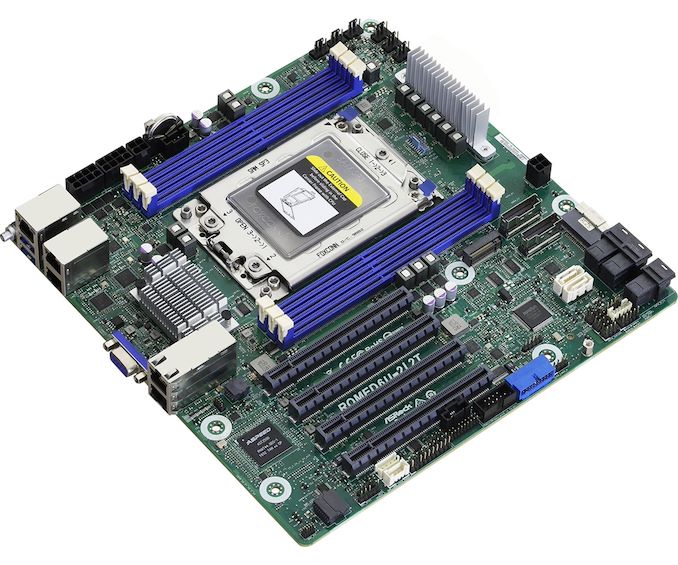 One of the items that makes a motherboard immediately standout is the amount of memory slots it has. For mainstream platforms, having two or four memory slots, for dual channel memory at one DIMM per channel (1 DPC) or two modules per channel (2 DPC) respectively is normal. If we saw a motherboard with three, it would be a little odd.

So what happens when a motherboard displays a different number of memory slots than expected? This is what happens with the new ASRock Rack ROME6U-2L2T motherboard. It supports AMD EPYC processors, both Naples and Rome, which have eight channel memory. Even at 1 module per channel, we expect a minimum of eight memory slots. But for this motherboard, there is only six. 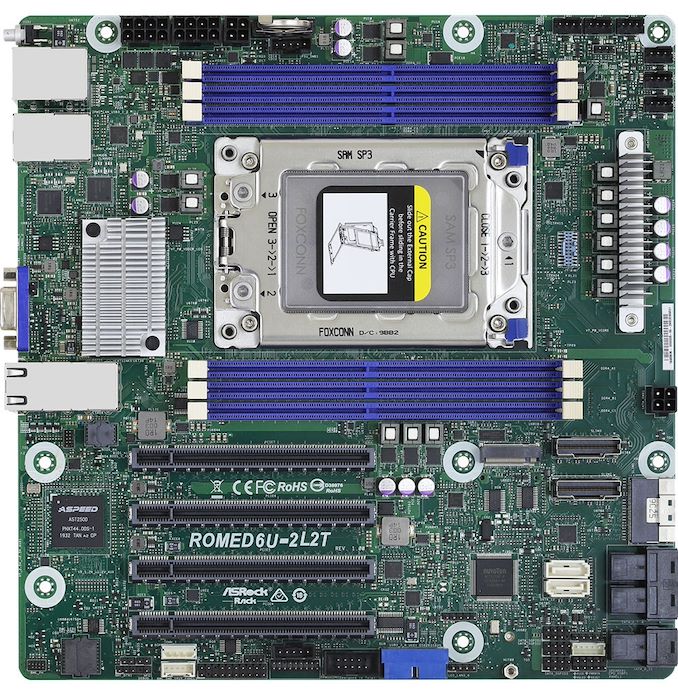 This means that this motherboard, at best, runs in six-channel mode. With a central IO die, like Rome, this means that overall memory bandwidth is reduced by a quarter (or a fourth). For Naples, this gets even weirder, because there is no central IO die, and it means one chiplet out of the four does not have access to memory, similar to how Naples-based Threadripper systems had two chiplets unable to directly access memory.

By why in the world would a motherboard vendor do something like this. It seems counterintuitive, and needlessly hamstrings the processor performance, right?

There are a range of reasons why this is a good idea. For a start, reducing the overall bandwidth (at least, in a Rome CPU) would only affect environments and software setups that are peak memory bandwidth bound. It also reduces the cost of fully populating the system with memory, and it reduces the power consumption enough that perhaps alternative cooling can be considered.

In the situation of this ROME6U-2L2T, the other factor is size. ASRock is putting this big EPYC socket in a micro-ATX form factor, and in order to make the most of the 128 PCIe 4.0 lanes on the motherboard, wanted to put a full x16/x16/x16/x16 layout on the PCIe side. In order to do this, the only way to give enough space for the PCIe slots was to reduce the total amount of memory slots available to the CPU. It’s an interesting tradeoff, likely made at the request of one of ASRock Rack’s customers.

Another angle to consider is a customer with an upgrade path. If a customer is moving from a single socket Xeon platform with six memory channels filled at 1 DPC, then upgrading to AMD with a motherboard that only has six memory slots means the memory can transfer over without any additional cost. This is an outside possibility, but one nonetheless.

As for the motherboard, it actually comes very well equipped. Those four PCIe slots are indeed all PCIe 4.0 x16, and the board has support for 14 SATA ports (12 via mini-SAS), three U.2 ports apparently capable of PCIe 4.0 x8 support, dual 10 gigabit Ethernet ports (10GBase-T via Intel X710-AT2), and two regular gigabit Ethernet ports from Intel i210-AT controllers. Onboard BMC is provided by an ASPEED AST2500, which also has a D-sub 2D video output and a dedicated network interface.

There are also six four-pin fan headers, which is a lot for a board this size (although they’re all in the top right corner), as well as a TPM header, a COM header, a USB 3.0 header, a USB 2.0 header, and USB 3.2 Gen1 ports on the rear.

For motherboards with abnormal configurations, this ROME6U-2L2T isn’t the first. Here’s a look back through a few that I remember.

The GIGABYTE EX58-UD3R was a Nehalem motherboard with a very odd 3+1 configuration, for tri-channel Nehalem processors. This meant that one channel could be substantially bigger than the others, leading to a memory bandwidth imbalance. This was incidentally the first HEDT motherboard I ever owned. 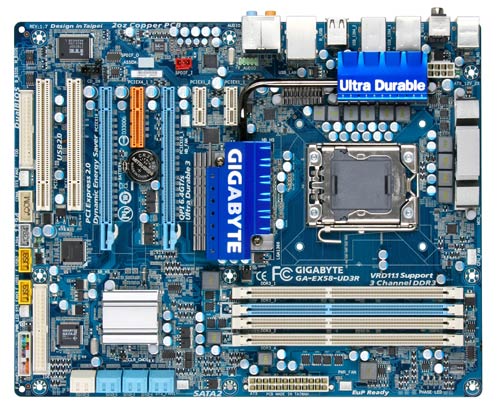 ASRock has form in this game, with the X99E-ITX high-end desktop platform, which should have support for four channel memory. However because of the mini-ITX sized motherboard, and the slim ILM socket being used for the high-end desktop processors, ASRock only put in two DDR3 memory slots on board. 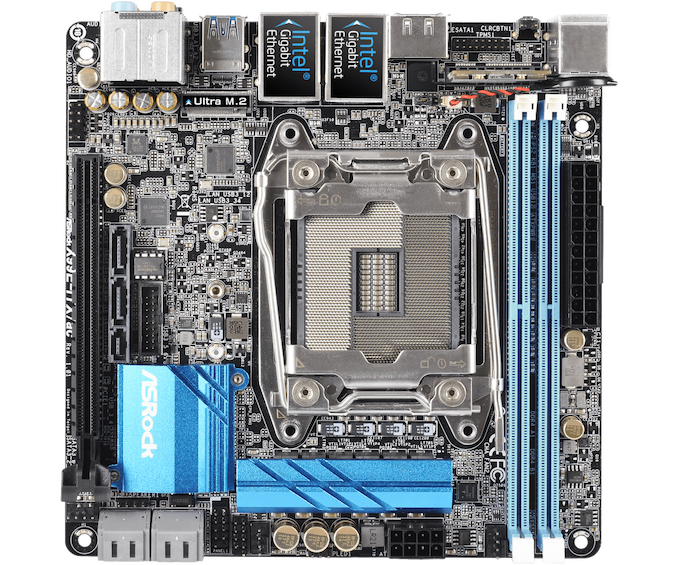 It also came bundled with its own CPU cooler, because ILM coolers weren’t that popular at the time. The reason ASRock went for full-sized memory was unclear, because with the X299E-ITX/ac edition, the same concept was used but with four channels of SO-DIMM. SO-DIMM DDR4 was notoriously hard to source at the time, making the use of the motherboard limited.

You can read our review of the X99E-ITX/ac here! 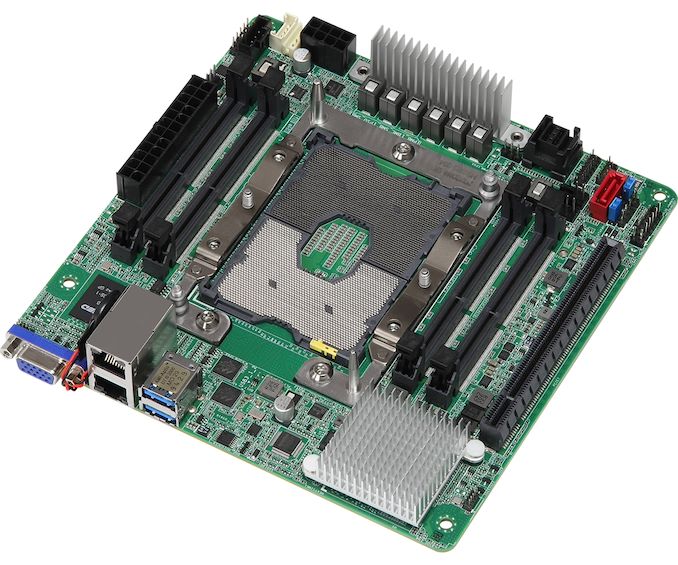 There is literally no space so put six slots on this board. Or so you would think. ASRock also released a six-module version, having to put two of the memory slots on the rear of the mini-ITX motherboard.

As for the ROME6U-2L2T, pricing and exact release date is unknown, as this is officially a product from the ASRock Rack side of the company. Interested parties are instructed to contact their local ASRock server suppliers.