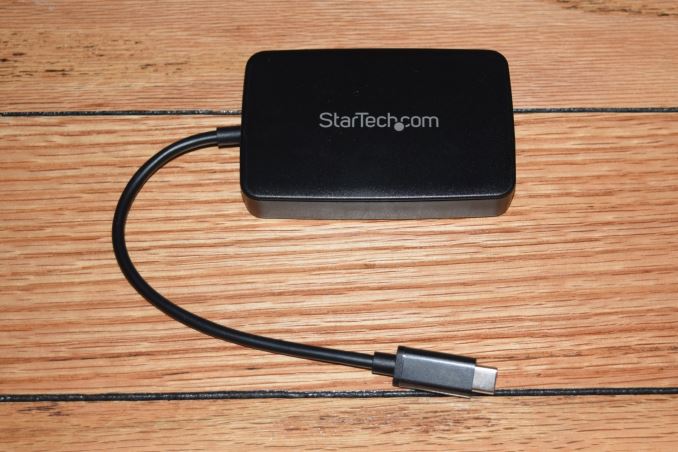 The TBT3TBTADAP package comes with the main adapter and a quick-start guide. The adapter has a permanently attached 8 in. cable with a Type-C male connector at one end. At the other end, we have a female Thunderbolt 2 port. 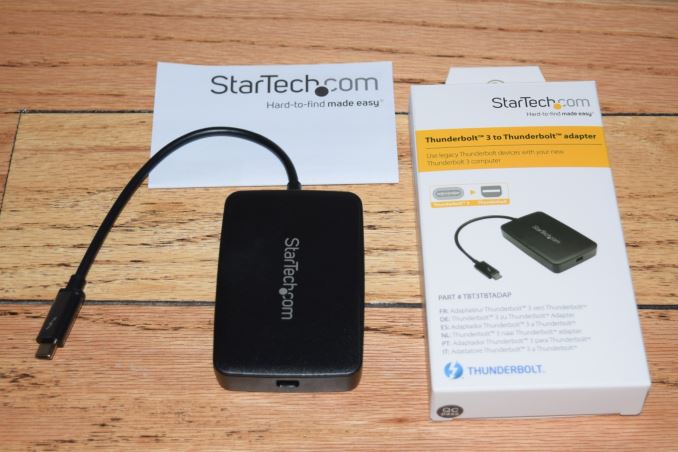 One of the important aspects to note is that the Thunderbolt 2 port, despite physically being a mini-DP port, doesn't support mDP or DP monitors. It does, however, support Thunderbolt displays. The adapter can also be used at the top of a daisy chain of legacy Thunderbolt peripherals.

The main focus of our evaluation was more on the qualitative aspects, rather than providing performance numbers. Towards this, we tested out the adapter with the following hardware:

The adapter also works with Thunderbolt displays, though we didn't evaluate that aspect ourselves. However, based on various e-tailer consumer reviews, it appears that people have reported mixed results. The root cause seems to be the host system itself. One of the most common resolutions we have seen is a hard power cycle / power on delay after upgrading the Thunderbolt firmware and drivers on the host PC.

The StarTech.com TBT3TBTADAP adapter is an active component. It consumes power from the host system in order to operate. In order to get a quantitative feel of this aspect, we hooked up the adapter to our GIGABYTE host system using the Plugable USBC-TKEY power delivery sniffer. The power consumption was tracked starting with just the adapter connected to the host PC. After some time, the LaCie Rugged Thunderbolt SSD was connected to the adapter and the CrystalDiskMark 5.0.2 benchmarks were processed on it, with a 30-second gap between each of the workloads. 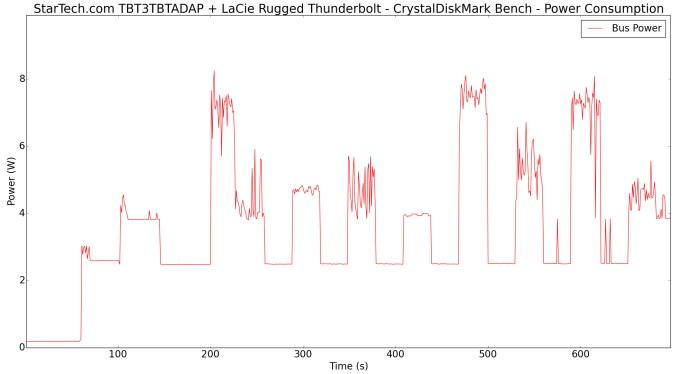 We can see that the adapter consumes 0.184 W from the host system even when there is no legacy peripheral connected to it. Once a peripheral is connected, the major component of the power draw from the Thunderbolt 3 host port is dictated by the connected device and the workload being processed on it.

Incidentally, we also confirmed that the adapter can do TRIM passthrough. This obviously depends on the the capabilities of the storage device being connected via the Thunderbolt link.

Coming to the business end of the review, we can say that the unit fulfills one of the most important requirements for Thunderbolt 3 to succeed - a way to utilize legacy Thunderbolt peripherals with Thunderbolt 3 systems. In our limited testing with a couple of host systems and couple of legacy peripherals, the adapter managed to perform without any hiccups. That said, based upon consumer reviews online, it appears that the experience is heavily dependent on the host system and the peripheral connected to the adapter. Fortunately, StarTech.com's customer service seems to be taking a proactive role in resolving these user complaints. Based on our own issue-free experience, as well as the general feedback on various e-tailer sites, we have no hesitation in recommending the StarTech.com TBT3TBTADAP Thunderbolt 3 to Thunderbolt Adapter. It is a must-have for consumers with legacy Thunderbolt devices that need to be used with modern systems equipped with Thunderbolt 3 Type-C ports.

The StarTech.com TBT3TBTADAP Thunderbolt 3 to Thunderbolt Adapter is currently available for $79 on Amazon, and carries a 2-year warranty.