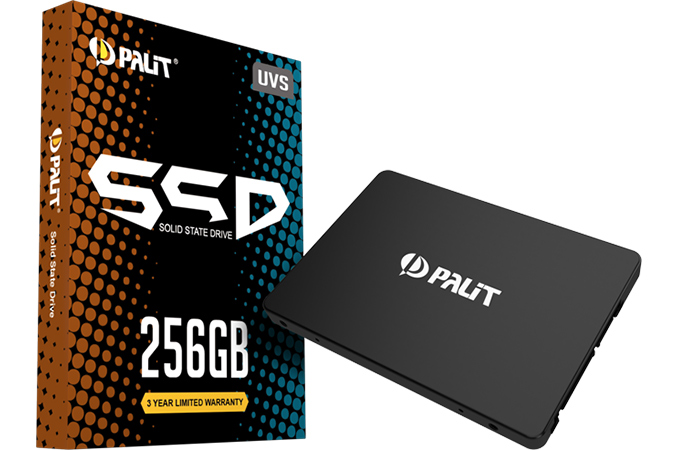 Palit has announced two families of SSDs that it plans to sell under its own brand. The new drives are aimed at entry-level and mainstream gaming PCs, and will be based on controllers from Phison using 3D MLC or 3D TLC NAND flash memory from Micron depending on which drive you pick up. The Palit SSDs will be among the first drives on the market that will use a combination of a Phison controller and 3D NAND memory ICs from Micron, but we expect this combination to spread across several SSD vendors in due course.

Palit Microsystems is one of the world’s largest producers of graphics cards, but it is not entirely new to SSDs too. Palit’s GALAX and KFA2 brands have offered Phison-based SSDs for quite a while, but their lineups have never been large and the whole effort looked more like a brand development rather than an attempt to compete against much of the market. This time, Palit has announced two families of SSDs under its own trademark and with seven drives in total, it plans to address entry-level and mainstream gaming PCs. We do not know Palit’s plans in regards of higher-end drives in M.2 or add-in-card form-factors, but such products are available from other brands that Palit owns and it should not be a problem for the company to expand its own lineup if it needs to.

Before we start discussing the drives, let’s talk a little bit about the controller itself. Formally, the PS3111-S11 is positioned below the S10 because it has only two NAND channels with 16 CE targets and physically cannot deliver breakthrough performance. As it is a SATA controller, the PS3111-S11 does not have to deliver anything sequentially higher than 550 MB/s and this is something it can do with both MLC and TLC chips (sustained performance is a different comparison). The most important advancement of the controller versus its predecessors is that the PS3111-S11 supports LDPC ECC, and thus can be enabled on SSDs with sufficient endurance. Additionally, the PS3111-S11 supports 3D and 1z MLC/TLC NAND flash and memory with large (8 KB and 16 KB) blocks. 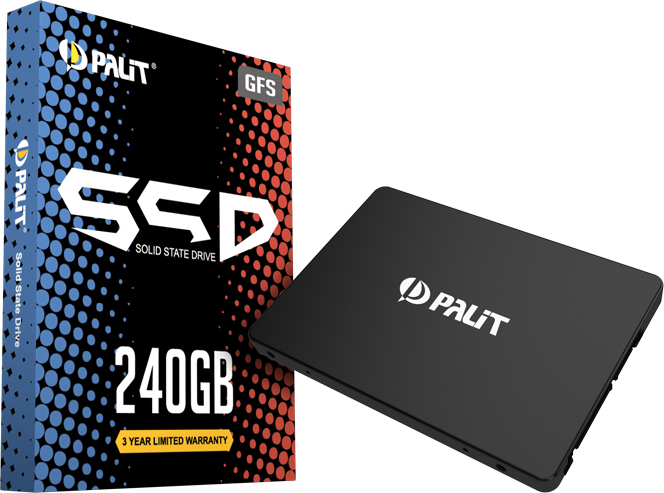 The Palit GFS lineup consists of three drives with 120 GB, 128 GB and 240 GB capacities all based on 3D MLC and offering all the endurance-related benefits of such memory. From a performance point of view, the GFS SSDs are slightly faster than the UVS drives: they are rated for up to 560 MB/s sequential read speed and up to 480 MB/s sequential write speed. Palit also states they can also perform up to 75,000 read IOPS and up to 87,500 write IOPS (240 GB version only). Palit may decide to expand the GFS lineup with higher-capacity offerings over time, but right now, its premium drives only offer entry-level capacities.

There are two intrigues about Palit’s SSDs: the memory supplier and actual manufacturer. Typically, Phison ships its controllers with memory and firmware and in many cases even provides assembly and test services (essentially, shipping already made drives). Despite this, Palit has enough SMT lines and can produce virtually everything itself. At present, we do not know whether Palit-branded SSDs are made by Palit, or are manufactured by a third party, but the latter is clearly a possibility here.

The supplier of the NAND is also not obvious and could come from different sources. Palit does not disclose who is their supplier, but it is worth noting that Phison usually ships its controllers primarily with memory from Toshiba. We do know that there are Phison PS3111-S11-based reference designs featuring Toshiba’s BICS2 memory (which is not exactly positioned for SSDs by Toshiba) as well as S11 drives with Micron’s 3D NAND memory.

The Palit SSDs are expected to hit the market in the coming months. We do not have any information about their MSRP of the new drives, but it is logical to assume that Palit will try to make them competitive in terms of pricing.