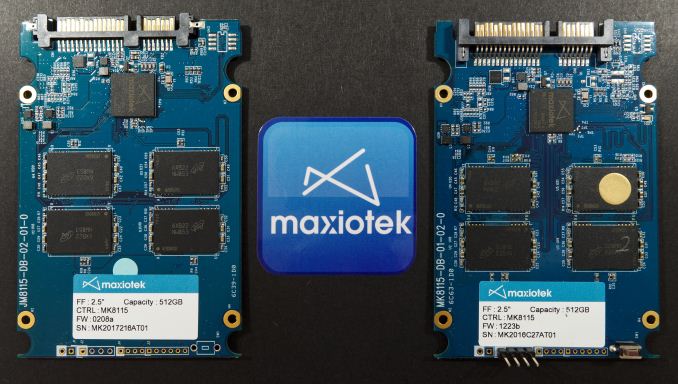 Maxiotek is a very new name in the SSD market, but there's a long history behind the company. Last year, JMicron spun off their SSD controller business into Maxiotek, and the new company has retained the same engineering team and roadmap. Their first new SSD controller since being spun off is the Maxiotek MK8115, and recently we've finished testing on 512GB engineering samples that use it with both Micron 3D MLC and TLC.

JMicron was one of the oldest players in the SSD market. When MLC SSDs first started to become affordable enough for some consumers, the JMicron JMF602 controller dominated the market, usually paired with Samsung MLC NAND flash. JMicron's turnkey solution was the starting point for many memory companies' entry into the SSD market. However, JMicron's fortunes changed when Intel got into the game with the X25-M and set a new standard for SSD performance. The X25-M put the JMF602 to shame and JMicron's reputation and market share have never fully recovered. JMicron's controllers matured along with the rest of the SSD market, but they've never been ahead of the curve and have largely been relegated to competing at the low end of the market.

The JMicron SSD controller roadmap largely survived the transition to Maxiotek's independence, but everything got renamed and a few plans were changed. A few existing JMicron controllers are still for sale under their existing names, but even the flagship JMF670H is quite outdated, with a limit of 512GB capacity and no support for TLC NAND.

The first of the new Maxiotek-branded controllers is the MK8115 SATA SSD controller. The MK8115 was originally planned to be an entry level solution, but for now it serves as the replacement for all the remaining JMicron SSD controllers. MK8115 is a big step forward: it increases the maximum drive capacity to 1TB, it adds support for 3D MLC and TLC, SLC caching, TCG OPAL encryption, and more robust error correction.

The MK8115 controller does not use an external DRAM cache. DRAM-less controllers allow for a lower total bill of materials and a simpler and more compact PCB layout, but at the cost of lower performance. Mainstream SSD controllers typically use 1GB of DRAM for every 1TB of flash; this DRAM is not used to store user data that is in flight but to cache the metadata about where each logical block address is physically stored on the flash memory. Due to the wear leveling flash SSDs require, this information is constantly shifting with every write and it must be consulted for every read operation.

Meanwhile also on Maxiotek's roadmap and due to hit the market this year is the MK8113 controller. Based on the same die as the MK8115, MK8113 will use a larger BGA package to enable an external DRAM interface with support for up to 2GB of DRAM and thus 2TB of flash. A successor generation consisting of MK8213 and MK8215 will further improve the error correction capabilities with codes comparable to LDPC, allowing cheap planar TLC to be supported with acceptable write endurance. The MK821x controllers are expected to be used mainly in ultra low-cost SSDs that are unlikely to be sold in the North American market, which is increasingly using 3D NAND that Maxiotek feels does not require the higher-overhead error correction.

Maxiotex also has PCIe SSD controllers in the works, again in pairs with and without external DRAM support. MK8112 (DRAM-less) and MK8111 will use PCIe 3 x2 and AHCI instead of NVMe, so they will have a tough time catching on unless they are no more expensive than SATA. A later MK83xx generation will switch to NVMe and add support for the Host Memory Buffer feature that alleviates the worst limitations of DRAM-less SSD controllers. However Maxiotek hasn't given any target dates for controllers other than the current MK8115 and MK8113. 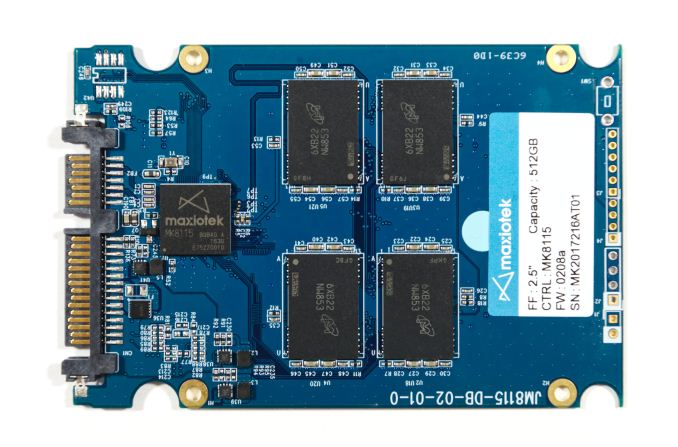 The two MK8115 engineering samples we tested used different revisions of the PCB layout and different firmware versions, but the general design is similar. The controller and four NAND packages are the only large components on the top side, and there's plenty of empty space. The back side has a handful of smaller components and empty pads for four more NAND packages as well as for the power loss protection capacitors enterprise and industrial models would require. The 512GB drive with 3D MLC is using four 32GB dies per package while the TLC drive is using three 48GB dies per package for a much larger overprovisioning ratio.

Maxiotek's first design win for the MK8115 was recently released: the ADATA Ultimate SU700. The SU700 pairs the MK8115 controller with Micron 3D TLC NAND, and is positioned just below the SU800 (Micron 3D TLC with Silicon Motion SM2258 controller) as ADATA's new entry-level 3D NAND SSD. The SU700 is also using higher levels of overprovisioning than our engineering samples of MK8115; whereas our samples are 512GB, ADATA ships its equivalent SU700 with an end-user capacity of 480GB, while the other SU700 capacities are 120, 240, and 960GB.

The MK8115 is the first SSD controller from Maxiotek to ship, but the last generation of JMicron SSDs are an interesting point of comparison as they are effectively the ancestors of this new controller. We have results for both the ADATA XPG SX930 and an earlier engineering sample of the same JMF670H controller. Both of those drives used planar MLC NAND.

We have not yet tested any other SATA SSDs using Micron's 3D MLC NAND (only ADATA has started shipping such a drive), so we're including the results for a PCIe SSD that uses Micron 3D MLC. That drive was an engineering sample of the Silicon Motion SM2260 platform, which is now retailing as the ADATA XPG SX8000.

Micron's 3D TLC has seen wider adoption and is used in the Crucial MX300 and ADATA Ultimate SU800. Intel's version of the same 3D TLC design is used in the Intel SSD 600p, one of the cheapest PCIe SSDs on the market. These drives offer the best comparisons of how the MK8115 stacks up against other controller designs from Marvell and Silicon Motion.

We have not tested many DRAM-less SSDs in recent years. The Phison S11, Marvell 88NV1120 and Silicon Motion SM2258XT are the primary competitors at the moment, but we have not yet tested drives using any of those controllers. The OCZ VX500 used Toshiba 15nm MLC with a controller that supports external DRAM, but only the 1TB model was populated with extra DRAM, and only 256MB. It's possible that the 512GB VX500 has some DRAM built-in to the controller package.