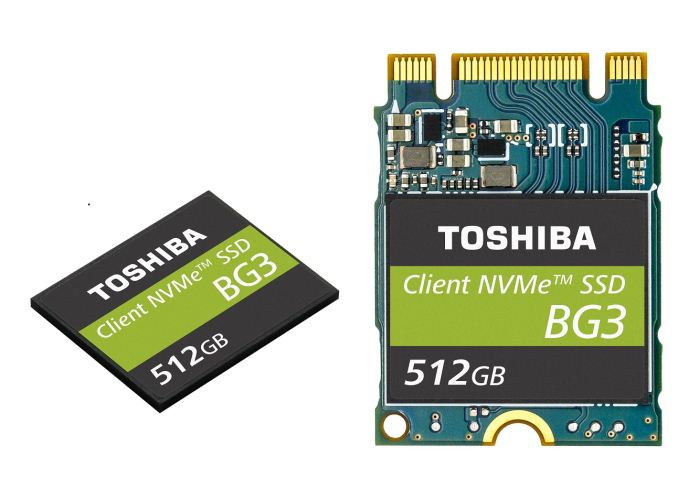 Toshiba's transition to their 64-layer 3D NAND flash memory continues predictably with today's launch of their third-generation BGA SSD, the BG3 series. First unveiled in 2015, Toshiba's family of BGA SSDs serves as their entry-level client OEM NVMe offering, with a focus on low power use and compact packaging rather than high performance. A year ago, Toshiba's BG series became their first client SSD to adopt their 3D NAND and it was one of only a handful of products to use their 48-layer BiCS2 3D NAND. This year, Toshiba finally has 3D NAND suitable for widespread adoption in their 64-layer BiCS3 3D NAND. The BG3 is their third SSD announced with the new 3D NAND, after the XG5 mainstream NVMe SSD for the OEM market and the TR200 retail SATA SSD. So far, all of Toshiba's 64-layer 3D NAND SSDs are using the 3-bit-per-cell TLC variant.

Aside from the update to the new generation of 3D NAND, little has changed with the BG series over the previous generation. The BG3 still uses the standard M.2 16x20mm BGA package with a PCIe 3 x2 link. As with the last generation, the BG3 is a DRAM-less SSD that supports the NVMe 1.2 Host Memory Buffer feature to mitigate the performance impact of not including DRAM on the SSD itself. The BG3 uses only about 38MB of the host system's RAM to cache mapping information about which logical block addresses are stored in which flash memory pages. That 38MB cache is sufficient to provide a substantial performance boost for workloads with a working set in the 2GB to 16GB range, with Toshiba citing improvements of 80% to 150% for random accesses at high queue depths.

The BG3 will be available in the same three capacities from 128GB to 512GB, but the packaging has been slimmed slightly: the smaller two models are now 1.3mm thick instead of 1.4mm, and the 512GB model is now 1.5mm instead of 1.65mm. The BG3 will also be available mounted on a removable single-sided M.2 2230 card. The BG3 is rated for up to 1520 MB/s for sequential reads and 840MB/s for sequential writes, with a maximum power draw of 3.2W and a typical active power of 2.7W. As with all of their OEM SSDs, Toshiba is not disclosing exact pricing, but they say it is comparable to SATA drives. The BG3 is currently sampling to OEMs and will be on display at Flash Memory Summit next week.

Toshiba plans to continue transitioning to 64-layer 3D NAND in every segment of the SSD market. The OEM counterpart to the TR200 SATA SSD will be the Toshiba SG6, which will complete their client OEM lineup. We expect retail NVMe products to be announced later this year.