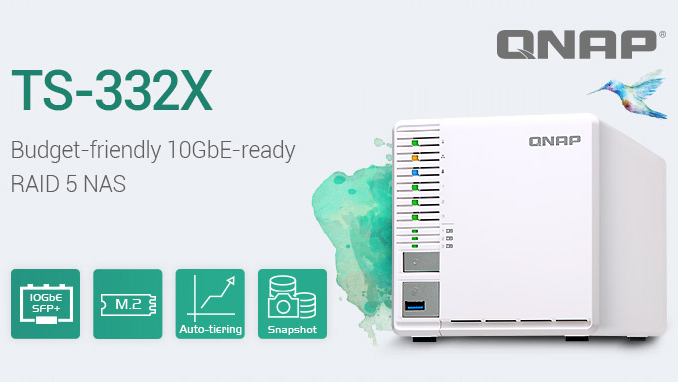 QNAP has announced its new three-bay NAS designed for SOHO market. The TS-332X also happens to be one of the industry’s first three-bay NASes that integrates a 10 GbE controller, so it should be able to offer rather high network performance for this market segment.

The QNAP TS-332X is based on Annapurna Labs’ Alpine AL-324 SoC (four ARM Cortex-A57 cores clocked at 1.7 GHz) outfitted with 2 or 4 GB of DDR4-2400 memory (upgradeable to 16 GB) as well as 512 MB of flash memory for caching. The NAS can accommodate three hot-swappable 2.5/3.5-inch SATA HDDs as well as three M.2-2280 SATA SSDs. The storage device officially supports hard drive of up to 12 TB capacity, but it is seemingly just a matter of time before QNAP certifies higher-capacity HDDs for this NAS. In the meantime, even three 12 TB hard drives and three 1 TB SSDs already provide a formidable amount of storage space for SOHO environments. 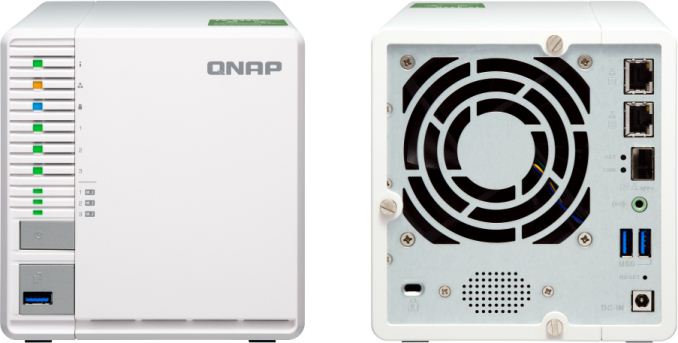 Like other modern NAS from QNAP, the TS-332X runs the company’s QTS 4.3.5 operating system, which supports a range of storage specific features, most notable RAID 5 and virtual JBOD. Other features include Qtier technology, which regularly places frequently used file/data on SSDs, encryption, snapshots, Qsync cross-platform file sharing (for Apple, Windows, and Linux machines), and so on.

One of the key selling points of the QNAP TS-332X is its set of connectivity options. The NAS has two GbE LAN ports, one 10 GbE LAN SFP+ header three USB 3.0 Type-A connectors, and one 3.5-mm line-out audio jack. In fact, the TS-332X will probably be one of the industry’s first entry-level NAS with 10 GbE support, which is an evidence that faster wired networks are getting more popular among device makers.

QNAP has already started shipments of the TX-332X with 2 GB and 4 GB of DDR4 memory. MSRPs of the devices are unknown, but their three-bay NAS are usually priced rather reasonably.