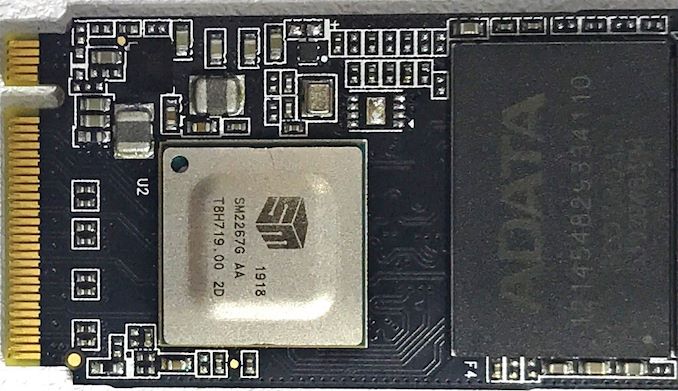 Being the next step in PCIe, SSD controller makers are looking to release their PCIe 4.0 designs into the market. Silicon Motion is not an exception, with its upcoming design scheduled to come to retail over the coming quarters.

Having captured a noteworthy share of turn-key SSD market in the recent years, Silicon Motion has a modern lineup of controllers that includes its top-of-the-range SM2262EN, the mainstream SM2263XT/SM2263G, and the SM2263EN for entry-level 3D QLC NAND-based SSDs. SMI’s PCIe 4.0 SSD controller, the SM2267G, is in its final stages of development, it will be made available in the near future - ADATA showcased a prototype at Computex. The plan is to make SSDs featuring a PCIe 4.0 x4 interface available sometime in the second quarter of 2020 and aligning it with a launch of a next-generation mainstream PC platform.

What is noteworthy is that Silicon Motion’s PCIe 4.0 x4 controller is, as the company says, it belongs to a new design generation of its controllers, so we expect a variety of new features. Areas to expect are obvious: performance optimizations, compatibility with new types of 3D NAND flash memory, and improvements of endurance.

Actually, neither the features nor the specs of the SMI's PCIe 4x4 controller are confirmed by Silicon Motion at this point, but there is a clear plan to make Silicon Motion-powered PCIe 4.0-enabled drives available sometime in Q2 in 2020.