As the full year 2021 earnings season rolls along, the next major chip maker out of the gate is AMD, who has been enjoying a very positive trajectory in revenue and profits over the past few years. The company has continued to build upon the success of its Zen architecture-based CPUs and APUs in both the client and server spaces, as well as a full year’s revenue for the APUs powering the hard-to-find Playstation 5 and Xbox Series X|S. As a result, these products have propelled AMD to another record quarter and another record year, as the company continues to hit revenue records while recording some sizable profits in the process.

For the fourth quarter of 2021, AMD reported $4.8B in revenue, a 49% jump over the same quarter a year ago. As a result, Q4’2021 was (yet again) AMD’s best quarter ever, built on the back of strong sales across the entire company. Meanwhile, due to last year’s unusual, one-off gain related to an income tax valuation allowance, AMD’s GAAP net income did dip on a year-over-year basis, to $974M. In lieu of that, AMD’s quarterly non-GAAP net income (which excludes the tax allowance) was up 77% year-over-year, which is an even bigger jump than what we saw in Q4’20.

AMD’s continued growth and overall success has also boosted the company’s gross margin to 50%, marking the first time since at least the turn of the century that AMD has crossed the 50% mark. Besides underscoring the overall profitability of AMD’s operations, gross margins are also a good indicator of the health of a company; and for a fab-less semiconductor firm, 50% is a very good number to beat indeed. AMD is now within 5 percentage points of Intel’s gross margins, a feat that at one time seemed impossible, and highlighting AMD’s ascent to a top-tier chip firm.

As for AMD’s full-year earnings, the company has been having great quarters all year now, so unsurprisingly this is reflected in their full-year results. Overall, for 2021 AMD booked $16.4B in revenue, which was an increase of 68% over 2020, and, of course, sets a new record for the company. AMD’s gross margin for the year was 48%, up 3.7 percentage points from FY2020, and reflecting how AMD’s gross margins have been on the rise throughout the entire year. 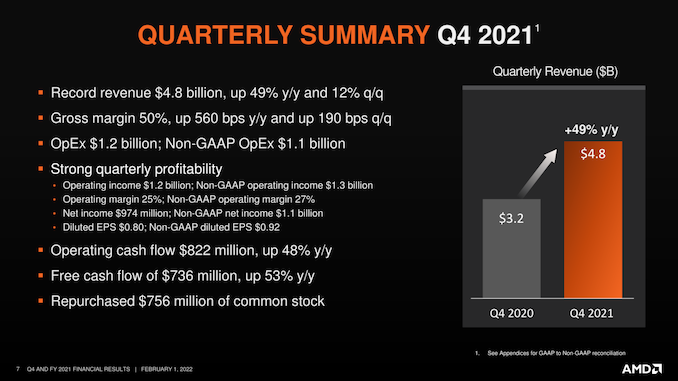 All of this has played out nicely for AMD’s profitability, as well. For the year AMD booked $3.2 billion in net income, and unlike 2020, there are no one-off tax valuations inflating those numbers. Amusingly, even with that $1.3B valuation for 2020, AMD still beat their 2020 net income by a wide margin this year, bringing home $672M more. Or to look at things on a non-GAAP basis, net income was up 118% in a year, more than doubling 2020’s figures. Suffice it to say, the chip crunch has been very kind to AMD’s bottom line in the past year. 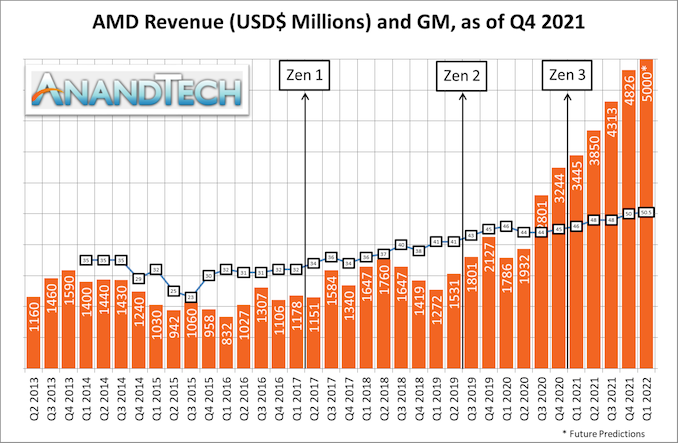 Moving on to individual reporting segments, 2021 was a year where all of AMD’s business units were seemingly firing on all cylinders. Client CPUs, GPUs, server CPUs, game consoles; 2021 will go down as the year where nobody could get enough of AMD’s silicon.

For Q4’21, AMD’s Computing and Graphics segment booked $2.6B in revenue, a 32% improvement over the year-ago quarter. According to the company, both Ryzen and Radeon sales have done very well here, with both product lines seeing further sales growth. On the CPU/APU front, average sale prices were up on both a yearly and quarterly basis, reflecting the fact that higher priced products are making up a larger share of AMD’s processor sales. And while AMD doesn’t offer a specific percentage breakdown, the company is reporting that notebook sales were once again the leading factor in AMD’s Ryzen revenue growth, coming on the back of strong demand for higher margin premium notebooks. And, based on overall growth in the number of processors sold, AMD believes that they’ve increased their market share (by revenue) for what would be the seventh straight quarter.

Meanwhile on the GPU front, AMD is reporting that graphics revenue has doubled on a year-over-year basis. According to the company, GPU ASPs are up on a year-over-year basis as well, though interestingly, they’re actually down on a quarterly basis due to what the company is attributing to the product mix – which in turn is presumably the ramp-up and launch of their first Navi 24-based products such as the RX 6500 XT. AMD’s prepared remarks don’t include any mentions of cryptocurrency, but it goes without saying that for the last year AMD has encountered little trouble in selling virtually every GPU it can get fabbed.

Finally, AMD also folds its data center/enterprise GPU sales under the C&G segment. There, AMD is reporting that revenue has more than doubled on a YoY basis, thanks to last year’s launch of the Instinct MI200 accelerator family. Unfortunately, AMD doesn’t offer any unit or revenue breakouts here to get a better idea of what data center shipments are like, or how much of those sales were MI250X accelerators for the Frontier supercomputer.

Meanwhile, AMD’s Enterprise, Embedded and Semi-Custom segment booked $2.2B in revenue for the quarter. The 75% year-over-year increase in revenue was driven by both improved EPYC sales as well as higher semi-custom sales.

As is usually the case, AMD doesn’t break apart EPYC and semi-custom sales figures, but the company is noting that data center, server, and cloud revenue – essentially everything EPYC except HPC – all more than doubled versus the year-ago quarter. All of which propelled AMD to doubling EPYC sales versus Q4’20, setting new records in the process. AMD has also noted that they’ve shipped their first V-cache enabled EPYC CPUs (Milan-X) to Microsoft, who is using them in an upcoming Azure instance type. 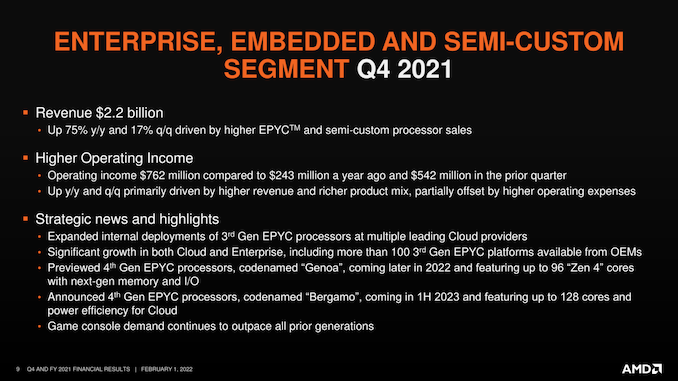 As for semi-custom sales, AMD is riding a wave of unprecedented demand for game consoles that has Sony and Microsoft taking every console APU they can get. Furthermore, despite this going on now for the last year and a half, AMD still expects semi-custom sales revenue to further grow in 2022 on the back of continued orders from console makers.

With all of that said, however, as AMD’s revenues have increased, so have their costs. For both the Client and Enterprise segments, the company is reporting that operating income growth has been partially offset by higher operating expenses. This encompasses both higher wafer prices from TSMC, as well as higher costs for things such as shipping. AMD can more than absorb the hit, of course, but it’s a reflection on how AMD has needed to spend more in order to secure wafers and supplies on an ongoing basis. 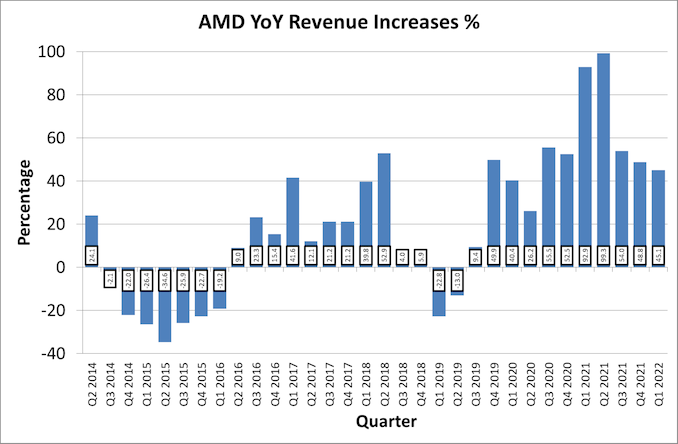 Looking forward, AMD is (understandably) once again expecting a very promising first quarter of 2022 and beyond. AMD has enjoyed significant revenue and market share growth over the past few years, and the company’s official forecasts are for that to continue into 2022. And, especially in the midst of the current and ongoing chip crunch, so long as demand holds, silicon may as well be gold for as valuable as it is to some of AMD’s customers.

To that end, AMD is officially projecting revenue growth of 31% for 2022, which would bring AMD to around $21.5B in sales. Given AMD’s 2021 estimate, this is likely once again conservative, though it is noteworthy in that it’s a bit less growth than AMD was projecting at this point a year ago for 2021. More interestingly, perhaps, is that AMD expects the non-GAAP gross margin for the year to land at around 51%, which even if it’s also a conservative estimate, would still be a big accomplishment for AMD.

Driving this growth will be a new slate of products for many of AMD’s important product lines. Along with ramping deliveries of Milan-X EPYC processors, AMD is also slated to deliver their Genoa EPYC processors, based on AMD’s Zen 4 CPU architecture, later this year. Zen 4 will also be making its appearance in Ryzen processors in H2’22, and in the meantime AMD has just launched their Zen3+ based Ryzen 6000 APUs for laptops. Finally, GPUs based on AMD’s forthcoming RDNA 3 architecture remain on the roadmap to be launched later this year as well. 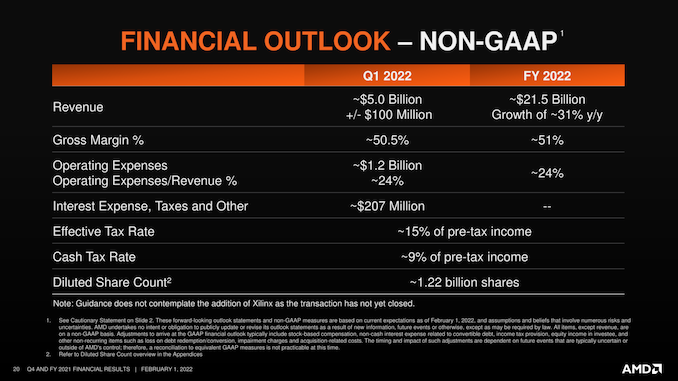