A Preview of Intel's Centrino 2 Platform

Today is an important day, it's the release of the long awaited Centrino 2 mobile platform (codenamed Montevina) from Intel. Unfortunately, product won't be shipping until August and review samples aren't exactly available so what follows can barely be called a preview. We'll take you through the components that make up Centrino 2 and give some guidance as to how it should perform, but we can hardly provide much in the way of test data. 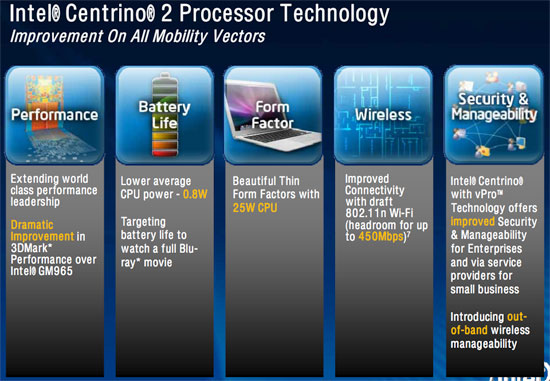 Pretty slide, but where's the hardware?

Where's the Pomp and Circumstance?

For the first significant update to the Centrino name since it was launched in 2002, Intel really dropped the ball on actually putting substance behind today's announcement. The platform itself is what we've come to expect from Intel's mobile team, it looks to have all the right pieces and there's a good mix of innovation and steady evolution here - the problem is that we can't really even begin to test any of the interesting bits, there's hardly any hardware out there to test.

We contacted HP, Dell, Gateway, ASUS and even Hypersonic (a division of OCZ) - not a single company could provide us with a Centrino 2 notebook for review. Intel blames the lack of available hardware on issues with the GM45 chipset as well as incomplete FCC certification on the new wireless adapters. Both issues have either been resolved or are in the process of being resolved, but they pushed the launch back by at least a month; Centrino 2 was supposed to debut in June.

Instead we have today's launch, which isn't really a launch, but rather a release of information. Intel promised us that OEMs will begin taking orders today, but availability will be within the next 30 days. While we have no reason not to believe Intel, we can't help but feel that the launch itself could've been done better had Intel's mobile team actually gotten hardware out into the wild. This whole thing seemed very much like a launch that was set in stone, regardless of whether or not hardware was ready to go.

Of all companies, Sony actually came through at the last minute and shipped us a Centrino 2 notebook. Unfortunately, in its pre-release state the system is far from perfect. It actually draws more power than our Santa Rosa Refresh notebooks and we couldn't even get the GM45's hardware accelerated H.264 decoding to work properly, severely limiting what we were able to do here today. On paper, as you'll soon see, Centrino 2 is a steady evolution of what Intel has been delivering over the past six years. In Intel's usual Centrino fashion both performance and battery life should increase (albeit slightly), the problem is that we just don't have the hardware available to test it.

This may be a side effect of AMD not being nearly as competitive in the mobile space as it is in the desktop market, but Intel's desktop team would never launch Conroe, Penryn or Nehalem like this. Intel has been touting the importance of mobility for years now, yet Centrino 2 is treated like a second class citizen. Despite selling into the consumer market, we'd hate for Intel to learn from the consumer electronics companies of the world and introduce products as press releases, without giving everyone the opportunity to truly verify its claims.