One of the fastest growing market segments in terms of computer sales is of course the mobile sector. As we have repeated many times in the past, for most of the work people do on a computer we have now reached the point where a decent laptop is more than sufficient. Yes, you will still pay more money than you would for an equivalent performance desktop. Yes, many desktop components are faster than any mobile options. And yes, we still find keyboards, mice, and desktop LCDs to be far more pleasurable to use overall. However, if you only have one computer in your household, there are plenty of good reasons to choose a laptop.

We'll start with the last area: input devices and displays. If you don't plan to move your laptop around, it's extremely simple to just connect a desktop keyboard, mouse, and LCD. More likely, you can set up a computer desk for normal use and use the laptop as a sort of docking station. Then if you ever want to go somewhere else to work - the couch, a coffee shop, the park, etc. - you can easily pick up your computer and cut the wires. As far as performance goes, outside of gaming and a few high-end applications, there's not much need for a state-of-the-art quad-core processor with a powerful GPU. In fact, if you don't plan on playing games at all you should be more than happy with the integrated graphics solutions.

Before you actually decide to take the mobile plunge, however, we need to step back for a moment. You may not need all of the performance that a modern $1500 desktop can offer, but sometimes needs change. Besides the additional cost of the notebook relative to a desktop, upgradability is without doubt one of the major deficiencies of laptops. Take just about any budget desktop system and you can add more memory, more hard drives, better audio, and significantly faster graphics cards - if you're willing to put in a bit of time spent tinkering. You can even replace the motherboard and processor should the need arise.

Laptops on the other hand are pretty much a static system. Sure, it's possible to increase the memory in some cases (though many laptops now ship with 4GB of RAM, which is certainly more than 32-bit Windows will ever need), and you can upgrade or replace the hard drive and often even the CPU. However, graphics chips, motherboards, and the built-in screen, keyboard, and touchpad are pretty much set in stone at the time of manufacture. If you need something faster, you will usually be better off just selling your old laptop and buying a new one rather than trying to figure out how to upgrade the various components (although we could probably say the same thing about some desktops). There's also the issue of component failures, which tend to occur far more often on notebooks and desktops in our experience. If your laptop is no longer covered by a warranty, repairs can be prohibitively expensive. 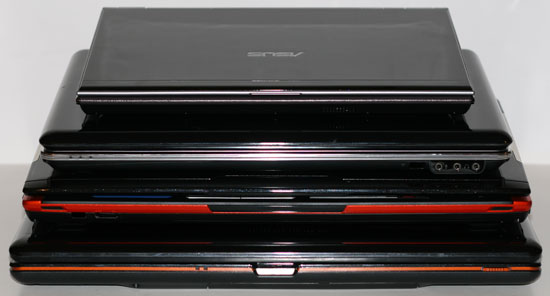 Okay, that should set the stage once again for a review of several new laptops. What makes these new laptops interesting is that they use Intel's Centrino 2 platform. Centrino 2 officially launched several months ago,, but outside of the gamer oriented Gateway P-7811 FX, we have not been able to get any review samples until now. Part of that seems to be related to some teething problems with Centrino 2; we know several of the manufacturers we contacted a few months back said that they were still working on finalizing their Centrino 2 offerings. Or maybe it's just that Centrino 2 doesn't really have many noticeable advantages over older Centrino laptops? That's certainly one of the things we want to investigate with these three new notebooks.

There are of course many different categories of Centrino 2 notebooks, starting at prices well under $1000 and going all the way up to the ultra expensive solutions. Once again, we have three notebooks that fall into the midrange category, although how they get there differs quite a bit. Two of the laptops are from ASUS and the third is from HP. Unfortunately, none of these are integrated graphics solutions - we just received a fourth notebook with Intel's latest GM45 chipset late last week, but testing is still underway. For now, we will be comparing these three notebooks with other recently tested midrange laptops. Since the other notebooks all use the Centrino platform, that will certainly be an interesting point of comparison.