MSI Wind U123 and ASUS 1000HE Show Netbook Evolution

When the first low-cost "computing appliances" arrived in 2007 as solutions to the non-profit OLPC (One Laptop Per Child) initiative, few realized a new class of computer was emerging. As frequent travelers to Asian shows and markets, many of the AnandTech staff had embraced the idea of the small full-featured notebooks that were all the rage in Asia but which were almost nonexistent in the US.

For some reason those same small notebooks that were so popular in Asia just weren't available in the US market.  The notebooks available in the US were the heavy "full-featured" 14-17" models that were barely portable. Just lug one of those beasts through a few airport security lines and the small light and elegant Asian notebooks for writing, web-surfing and spreadsheets start to look like a great idea. Of course in typical notebook fashion the smaller the notebook the more it generally cost at that time. That was a hard pill to swallow, but the charms of the smaller notebook were hard to resist if you could afford the price of admission.

The first OLPC notebooks in 2007 were a different breed than the small full-featured notebooks that were so popular in Asia.  The OLPC units were also small, even downright tiny, but they were much more limited in capabilities than most were willing to accept. Of course they weren't designed to even be sold in the general computer market. The $200 subcompact Intel Classmate PC was targeted at a third-world user who could finally afford a real computer or who was the recipient of one bought by an international agency as an education grant. The early models looked like toys but they were real computers aimed at education and children in the developing world.

They were called subnotebooks at first, but the idea was one that was hard to resist for many potential users outside the developing world. Provide just the computing power a user needed to do research on the web, write, manipulate spreadsheets, and do general educational computer use, and make it available at a very low price. Computing power had grown so fast in recent years, and costs had dropped so dramatically, that a pretty powerful computer could be built with a very low cost CPU and clever engineering. ASUS saw the potential and introduced the Eee PC late in 2007 to the American (and later worldwide) market. The Eee PC changed everything about the market. 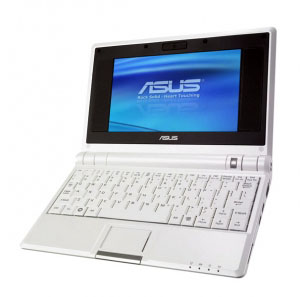 The original ASUS Eee PC was a massive hit in the US and it became popular throughout the world. It was tiny, weighing just 2 lbs, with a 7" screen, built-in WiFi and regular network ports, with standard ports and an integrated webcam for a price of less than $300. The ASUS Eee proved there was a market for a small, light, less powerful, low-cost laptop and the netbook was born. ASUS has produced many evolutionary Eee netbooks since and it seems every major notebook manufacturer has since jumped on the netbook bandwagon. Two of the last PC holdouts were Dell, who finally jumped on the bandwagon with their Inspiron Mini 9 and Mini 12 models, and Sony, who recently introduced the VAIO W "mini notebook".