Okay, let's get something out of the way right off the bat: I started work on a review of the Dell studio XPS 16 before CES 2009. Originally intended to go live at CES, I decided to hold off in order to conduct additional testing and send some questions to Dell. Ultimately, we ran into some problems with the sample laptop, which is a prerelease version with a few kinks that need to be worked out. Ironically enough, the one major complaint in involves a glitch with the LCD on the unit we received, but we didn't notice this problem on any of the other studio XPS 16 laptops at the show. Anyway, I'm holding off on the full review until Dell can provide a retail sample, which should occur in the near future. In the meantime, one of the initial test results was shocking enough that I felt it was time for a blog. That's right: it's time to talk about laptop LCDs again!

When Dell claimed that the Studio XPS 16 would have the highest color gamut of any current laptop, I was a bit skeptical. I mean, the best color gamut I've seen up to now was on the ASUS G2P, which managed a rather impressive 70% of the Adobe RGB 1998 gamut. The next best LCD I've tested happens to be the Acer 6920G 1080P model, coming in around 55%. Everything else is roughly 45% or lower. On their own, such numbers don't necessarily mean a lot, so let's give a point of reference. Desktop LCDs from several years ago typically scored around 70% to 75% -- in other words the best laptop LCD I've tested to date might be able to match the entry-level desktop LCDs.

Here are a couple charts from the most recent reviews for laptops and LCDs showing how things stack up. To say that the laptop LCDs are uninspiring is a gross understatement. 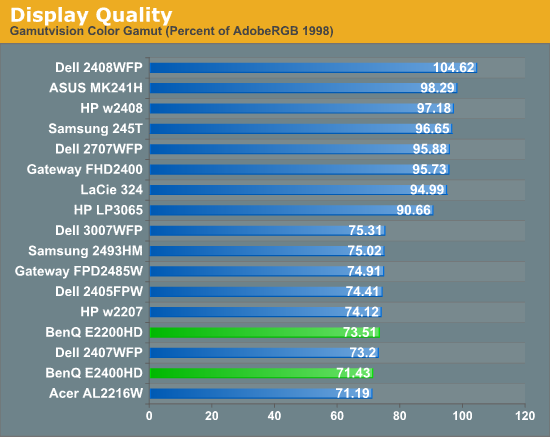 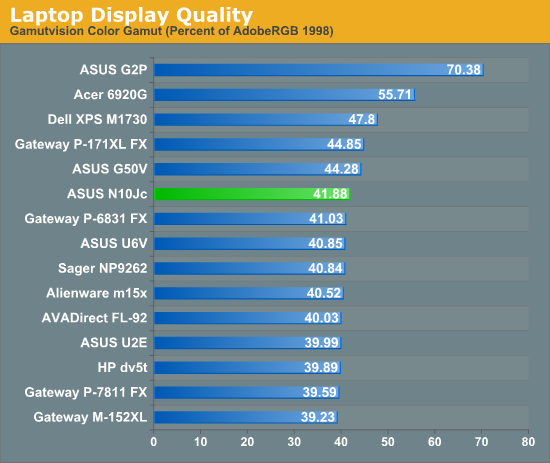 As you might have guessed, the reason for this blog is that I was just putting together the results from the Dell Studio XPS 16. Given that it has a 16" LCD with a 1080P resolution, I assumed Dell was using the same LCD panel as the Acer 6920G. It's worth noting that there are two LCD models for the Studio XPS 16, so perhaps the less expensive version is the same as the Acer laptop. As for the more expensive LCD... well, have a look at the following color gamut chart (courtesy of Gamutvision). 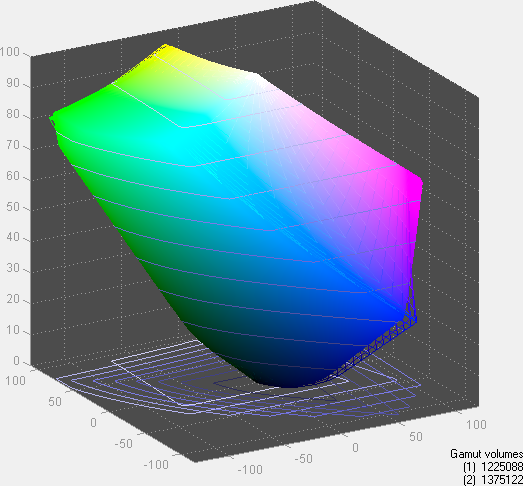 It's not just that Dell has managed to close the gap with desktop LCDs; they have actually surpassed what many of the best desktop LCDs achieve! A color gamut of 112% of the Adobe RGB 1998 standard is extremely impressive. The "secret sauce" in this recipe for success is that Dell uses RGB LED backlighting instead of the standard white or yellow LEDs (or CCFLs) found in most LCDs. Obviously desktop LCDs have managed better color gamuts prior to now, but this is the first LED backlit LCD I've seen that actually manages to provide a good color gamut. That bodes well for the future of both desktop and laptop LCDs based on LED backlighting -- good colors and lower power requirements all in the same package.

Unfortunately, there are still some major gaps between desktop and laptop LCDs. The biggest one is the native panel technology; I still haven't managed to procure any laptops that use something other than a standard TN (twisted nematic) panel. That's entry-level desktop LCD technology, and while it's certainly cheaper, I prefer to spend the money on S-PVA, S-MVA, or S-IPS panels (in that order). Frankly, I would love to see any of those technologies utilized in a laptop LCD! (On a side note, if you get a desktop LCD and you plan to use it in portrait mode, you absolutely do not want a TN panel!) Panel technology also has a big influence on color quality, and so far none of the laptops I've tested come anywhere near what we see on a good desktop LCD. There are always spikes in delta E up to 5.0 or higher, and the Studio XPS 16 doesn't appear to change that.

Let's wrap things up with a little bit of polling, shall we? I have my opinions on how important a good LCD is when it comes time to purchase a new laptop, but I'm curious to hear your feelings on the subject. Let's not restrict things to just discussing LCD quality, though; I've put together several questions regarding LCDs. I'd love to hear your input, and if you have any other thoughts on the matter you can post below in the comments or drop me an e-mail.