Many people have no desire for anything other than a moderately fast laptop -- in fact, these people are certainly the majority by a huge margin. They would rather have reasonable performance and improved battery life, preferably in a package that doesn't weigh as much as a small car. On the other hand, there are users out there who want as much performance as possible in a mobile workstation. If you happen to be a member of the latter group, various companies are about to launch a substantially faster mobile behemoth.

The first we heard of this new laptop is courtesy of Eurocom, who will begin shipping their new Phantom-i7 sometime in April. We snagged images off their website, which you can see in the following gallery.

If that laptop looks familiar, you might recognize it as the descendent of the Clevo D901C that we first looked at in August 2008. While the exterior looks about the same, the inside has received some notable upgrades. In place of desktop Core 2 Duo/Quad processors, the new D900F will support Core i7 desktop processors, up to and including the Core i7 965. That means in addition to a quad-core processor -- able to run eight threads courtesy of with Hyper-Threading -- you also get triple-channel DDR3 memory support via three SO-DIMM slots capable of supporting up to 12GB of DDR3-1333 memory. In addition, graphics have been upgraded to support the latest mobile NVIDIA GPUs, including dual GTX 280M cards in SLI.

Other areas remain essentially unchanged from the D901C. Three 2.5" hard drives are still supported, along with RAID 0/1/5, allowing up to 1.5 TB of storage with the latest laptop hard drives. Sadly, the keyboard also remains unchanged, which means you get perhaps the most unintuitive 10-key layout we've ever used. Clevo seriously needs to rethink the keyboard design -- Dell's XPS M1730 layout would be a good place to start.

Is this sort of notebook overkill? For some, certainly, but if you happen to need the ability to perform demonstrations of CAD/CAM/CAE, 3D rendering, video processing, or other professional applications away from the office on a regular basis, a mobile workstation is far more convenient than trying to haul around a 30+ pound desktop chassis. Pricing has not been announced, but it's a safe bet that these notebooks will start at well over $3000. You can view additional details of the system on Eurocom's website. The full text of the press release is included below.

UPDATE: So apparently there was some confusion on my part with the information sent. I'm leaving the original text, but there's plenty of errors that need to be corrected. First, the images above are NOT from the D900F but instead show the original D90xC chassis. Changes have been made, which means that the final product will look different from the above and have some other spec changes. Eurocom informed me that they are looking to support four physical hard drives, but it's not clear if that will really happen. Second, the D900F will have an HDMI port (presumably along with DVI) and an eSATA port. Finally, the D900F is not yet confirmed to support SLI (or CrossFire). Below is an image courtesy of Gophn at the NotebookReview forums. Now if you'll pardon me, I have some egg to wipe off my face.... 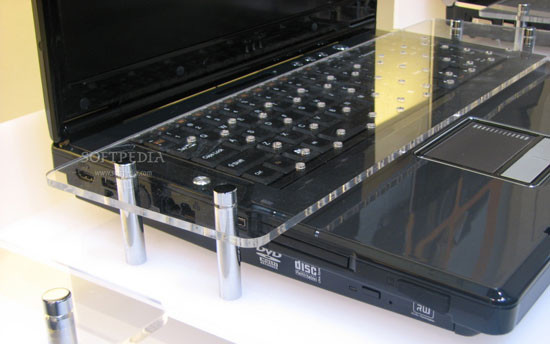 An actual picture of the D900F

The World's First workstation and server-class notebook with Intel i7 Quad Core or XEON processor; 1.5 Terabytes of storage, RAID 5 and internal 1 hour Battery!

Featuring workstation-class or server-class Intel Core i7 or Xeon Processor and up to 16GB of DDR3-1366 memory, the D900F PHANTOM-i7 also features the largest storage capacity on the market today - a whopping 1.5TB with RAID 0/1/5 - making it the perfect mobile workstation or server laptop for users who demand extra-large capacity storage and reliability for true portable server / workstation experience.

Driving the system is Intel Core i7 the newest 130W 3.2GHz Extreme Edition i7-965 processor with bus speeds of up to 2x 6.4GT/sec and 8MB of L3 cache, which delivers exceptional multi-tasking and multi-threaded performance. It also supports the newest line of Intel Core i7 Xeon processors X55xx series.

The PHANTOM-i7, which measures 15.8" x 11.9" x 2.05" and weights under 12lbs, also supplies tremendous SATA-300 storage (up to 1.5TB using three hard drives). Customers may also choose between RAID 0, RAID 1 or RAID 5 for the ultimate transfer rates and application load times or redundancy.

"It's a server or workstation-caliber computer complete with built-in Uninterrupted Power Supply (UPS) in a 12pounds notebook form factor," said Mark Bialic, President of Eurocom. "This is one extremely fast notebook that offers server or workstation caliber capabilities. It is designed to replace traditional desktop based workstations. It offers incredible high ROI by allowing companies to be more productive and offer new "on the go" CAD/CAM services while greatly reducing overall IT management costs".

Mobile workstations feature the most advanced computer technology, such as: