AMD’s Northern Islands family is composed of four GPUs, roughly divided into two categories. At the top is the 6900 series powered by Cayman, AMD’s first VLIW4 GPU. Below Cayman are three more GPUs, all derived from the VLIW5 Evergreen generation(5000 series). The first of these GPUs was Barts, which is the basis of the 6800 series that launched back in October of 2010. However up until now we haven’t seen the other two mystery GPUs in the retail market. Today that starts to change.

The final two Northern Island GPUs are Caicos and Turks. They have been available in the OEM market for both desktop and mobile products since the beginning of the year, but as is often common with low-end/high-volume GPUs, a retail presence comes last instead of first. AMD is finally giving Caicos its first retail presence today; it will be powering the new Radeon HD 6450. Packing all the upgrades we saw with Barts last year, it will effectively be replacing the Radeon HD 5450. But how well does AMD’s latest stand up in the crowded low-end market? Let’s find out.

Although it’s likely redundant to say that the GPU market is on a constant forward march in performance, it’s a very prudent analogy when discussing the Radeon HD 6450. With the launch of a new generation of integrated GPUs from both Intel and AMD in the last few months, the tail-end of the line took a big step forward and now everything else must move forward to keep pace. AMD’s previous low-end product, the 80SP Radeon HD 5450, is effectively matched by Intel’s HD 3000; meanwhile you can get as many SPs in an AMD Zacate APU, although performance isn’t quite enough to catch the 5450. Regardless, when iGPUs can deliver the performance of the lowest-end dGPU, a new low-end dGPU is required. This is Caicos.

At the lower end of the GPU market we’re accustomed to seeing a very large gap between the lowest GPU and the next model higher; with the 5000 series it was the difference between the 80SP Cedar and the 400SP Redwood GPUs. The performance drop-off is quite severe, but it’s what’s necessary to make a GPU small enough and cheap enough to meet the needs of the extreme budget segment of the market. Thus while the latest generation of iGPUs requires AMD to produce a faster low-end GPU, they still need to keep it cheap enough for the market, and as such there won’t be a radical overhaul. 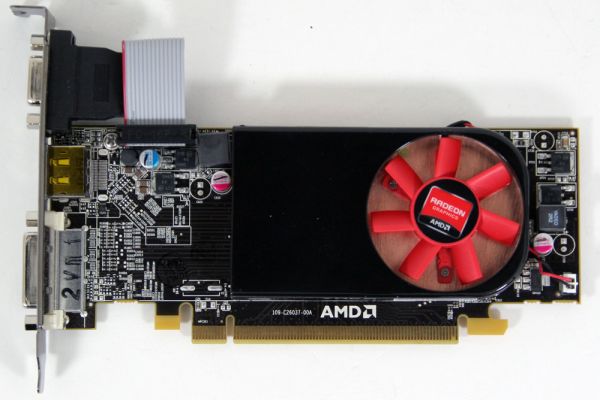 At the end of the day Caicos and the Radeon HD 6450 it’s based on are a larger version of the 5450 with Barts’ technology improvements. Coming from the 5450 AMD has doubled the SIMD count from one SIMD to two, doubling the number of SPs from 80 to 160. Meanwhile the number of texture units per SIMD has decreased from eight per SIMD to four per SIMD, resulting in the same eight texture units, but now split between the two SIMDs. This is now consistent with the rest of AMD's lineup, as Cedar/5450 had twice as many texture units in its 1 SIMD as other 5000/6000 parts normally have per SIMD.

The ROP side of the equation has not been changed however, pairing the 160SP compute core with the same set of four ROPs we saw on the 5450. What has changed on the ROP/memory side is support for GDDR5; while we will see DDR3 6450 cards too, AMD is more or less using GDDR5 from top to bottom now. For the GDDR5 6450 the core clock is 750MHz and the memory clock is 900MHz (3.6GHz data rate), so not only does the 6450 have more SIMDs than the 5450, but it’s clocked faster by 100MHz and has over twice the memory bandwidth too.

These changes give it a major leg-up on the 5450 while still keeping the GPU size manageable. The transistor count and die size has gone up as one would expect; the 5450 was 292M transistors for a die size of 59mm2, while the 6450 is 370M transistors at 67mm2. So the 6450 will likely cost more for AMD to produce, but only marginally so. TDP has also gone up from 6.4W at idle and 19W at load to 9W at idle and 27W at load, mostly due to the higher power consumption of GDDR5. 27W is still easily handled by passive coolers, and we should see a number of both actively and passively cooled cards.

AMD has put the MSRP of the 6450 at $55. This will cover both the 512MB GDDR5 and 1GB DDR3 varieties. Pricing of low-end cards rarely toes the line, so expect prices to be all over the place. At $55 the market is quite packed, so AMD’s competition is going to include the 5450, the 5550/5570, the GT 220, and even a few budget-priced GT 430 cards. A few of these cards are going to be quite a bit faster than the 6450—ultimately the economic advantage of a small GPU is more present in high-volume OEM sales than it is in retail sales.

In any case, the one thorn in the side of the 6450 is that it’s a soft launch. While all of our data is applicable to the existing similar OEM cards, retail cards won’t be showing up until the 19th. Honestly we’re a bit confused as to why AMD is soft launching the 6450 given that it doesn’t have any immediate competition—the more insidious reasons usually attached to a soft launch are that it’s to keep potential customers from buying a competitor’s product, but it’s not as if NVIDIA has recently launched a similar product. Anyhow, your guess is as good as ours, but it’s unfortunate to see AMD doing a soft launch after doing so well in the mid-range and high-end markets this year.