We are at Google IO 2011 and the focus today is on the Chrome browser and new Chromebooks running the Chrome OS. Google's core focus has been the creation of a seamless web experience, and to that end they have their cloud network. Sundar Pichai, Senior VP of Chrome, mentioned there were 70 million active users of Chrome in 2010 and that more than doubled in 2011 with 160 million. With the success of their browser, the Chrome OS seems like a logical follow up. Here are the highlights of today's presentations.

Google is now adopting a six week release cycle in their software updates for Chrome, with the goal of providing users even better performance with HTML5 and WebGL support. Previous web animations that relied upon drawing on the web canvas and running on software are predicted to run almost 100x faster by using WebGL. Google is also focused on GPU acceleration within Chrome and a demo of the speed with animations clearly showed how 1000 objects easily were rendered. How much of this will carry over to Chrome OS isn't clear, but it would make sense to keep the browser and OS versions more or less in sync. 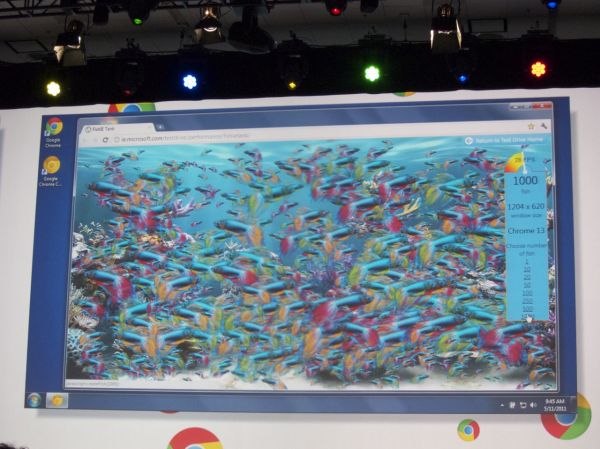 As if the world needed yet another name for a mobile laptop-like device, we now have Google's Chromebook to contend with. The core of a Chromebook is a standard laptop/netbook design, with the primary difference being the OS and applications. It's possible to go the DIY route and give Chromium OS a shot, but Google is partnering with Samsung and Acer initially to provided a more integrated and painless experience. We had a few moments to talk with Sundar and some of his key points were the design decisions associated with the architecture behind Chrome OS. Sundar said, "We wanted to create fundamentally the most out of the box experience with minimal user input to get started."

The initial Chromebook offerings will come in two flavors: WiFi only, or WiFi + 3G. These Chromebooks are not like a typical notebook computer, in that all of a user's photos, music, games, apps, and documents reside within Google's cloud. The default install includes Gmail, Google Docs, and Google Calendar, with other applications available via Google Apps. Chromebooks should be able to boot almost instantly, taking just eight seconds from power on to log in. They are always connected and have a battery that should last most of the day (Samsung is quoting 8 hours for their model while Acer targets a lower 6.5 hours of run-time), providing access to the web anywhere you need it. With regular updates, it has the potential to get better over time, and it's built with security in mind.

Samsung and Acer will be the initial two notebook providers, and Verizon will be the wireless provider within the US. The program stems from the original CR-48 pilot, and now Google has taken all that rich user feedback and ramped things up for the retail product.

The idea of a computer getting better over time is almost a foreign concept in our modern computer world. We tend to see performance degradation as apps are installed, drivers get updated, the OS adds new features and bloat, and a slew of other problematic hurdles. The goal is for Chromebooks to take care of all this behind the scenes, automatically delivering the most recent version directly to your laptop. How that ends up playing out and how long the initial hardware will continue to receive updates isn't clear yet, but we would expect something similar to the current state of Android smartphones as the bare minimum (without the need to have your carrier push out OS updates).

Availability and Pricing for Chromebooks

The release date for Chromebooks is June 15 in the US, UK, Germany, Netherlands, Spain, and Italy. We hope to see more countries added to the list in the latter part of 2011. Amazon and Best Buy are on board as resellers for the Samsung and Acer models. Samsung's Series 5 Chromebooks are slated to start at $429 for the WiFi only model and $499 for WiFi + 3G, and they'll be available in black or white at launch. The Acer models will start at $349 for the base model, with 3G versions also available. The current models use Intel's Atom Pine Trail platform, with dual-core N570 processors, and 16GB of mSATA flash storage. Samsung is going with a 1280x800 LCD while Acer will have 1366x768 panels. You can see additional images and specification details on the Amazon Chromebook page. 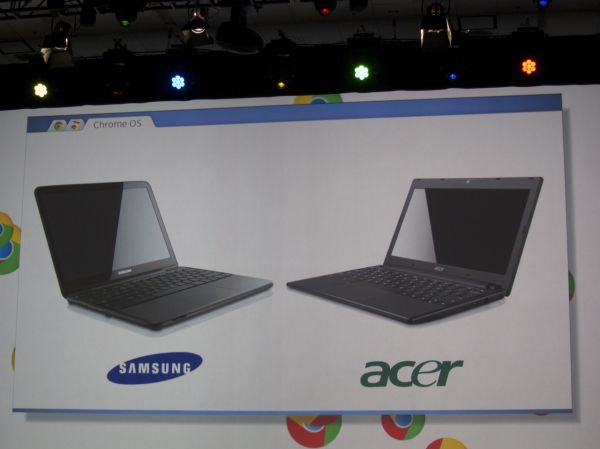 Google is also making a heavy push towards the corporate world by targeting a cost effective model. Businesses are targeted with a competitive $28/user monthly subscription rate, and educational institutions and government clients start at $20/user monthly.

Chromebooks for business will deploy a web console, support, warranty and replacements, and hardware auto-updates. IT admins will be empowered with a robust configuration panel that will allow adding of users, apps, and granular control over policies and other access control lists. If all of this sounds like something you might find useful, you can read more at Google's Chromebook site.

One final item to mention is in relation to the Chrome web store. Google announced a new 5% fee for web store applications, which could be a big boon to developers. There are no fixed, monthly, signup, or licensing fees. Developers are encouraged to deploy more applications and Google will help cater to their needs by expanding the Chrome web store and branching out to 41 languages.

Google demonstrated the popular game Angry Birds running within Chrome's browser, and it includes a special Chrome level for your enjoyment. It is available starting today. Whether we'll see more interesting gaming content (and just how far they can push the anemic GMA 3150 GPU in Pine Trail) remains to be seen.