The majority of my part-time, independent computer building work is spent assembling budget and midrange systems. Budget systems represent an interesting challenge in wringing as much performance as possible out of a limited amount of money. Midrange systems are, to me, more fun because of the flexibility that a larger budget offers—it's easier to tailor a rig to each buyer's particular needs. It's also great building midrange rigs because the prices on hardware are generally lower than ever, the hardware itself is absolutely more capable than ever, and software development has, at least for generalized daily use, not kept pace with hardware development. These factors all culminate in an opinion I find particularly exciting: I think it is reasonable to expect today's midrange, $1000 or so desktop PC to be more than adequate for the average user for the next five years.

Five years ago we witnessed the arrival of Intel's Conroe CPU architecture, which wrested the performance crown from AMD's Athlon 64 X2 CPUs. While the Conroe chips (and to a lesser extent, the original AMD dual-cores) are still serviceable, using them for more than basic tasks on a modern OS (read: Windows 7) with the common at the time 2GB DDR2 configuration is not an entirely painless computing experience--though a simple and inexpensive upgrade to 4GB RAM will do wonders. Even more so than the midrange PCs of 2006, I am confident that the systems outlined in this guide will remain capable of delivering an enjoyable computing experience to the average computer user until the end of 2016.

Windows 7 is clearly another "decade OS" like Windows XP was. Mainstream monitor resolutions have likely topped out at 1080p for the foreseeable future, and I simply don't see 3D monitors ever catching on at the mainstream level. Microsoft Office 2010 is no more demanding hardware-wise than Office 2007 was, and it's unlikely Office 2013 will be substantially different in this regard. As for the web, the explosion of mobile devices means content owners will either need to increase the separation of their mobile sites, or slow down the advance of what they're currently giving visitors. While increasingly powerful mobile processors mean the web's more demanding content (like Flash) will inevitably proliferate, right now, and for the near-term future, the limitations of mobile hardware will likely inhibit the web from becoming much more demanding of hardware than it is now. Further, development of graphics card technology has slowed down over the last few years and shows no signs of speeding up again anytime soon—though this may very well change with the launch of next-generation video game consoles.

Thus, right now is a good time to be in the market for a midrange DIY PC. On the Intel side of the chip, Sandy Bridge's immediate successor, Sandy Bridge E, is priced well above the midrange market segment. Ivy Bridge will likely be available for midrange buyers, though its performance increases over current Sandy Bridge CPUs represent a 'tick' in Intel's development scheme—better power consumption and higher frequencies, but likely not dramatic performance improvement. Graphics will be a healthier upgrade on IVB, but even a moderate discrete GPU will be much faster, not to mention Ivy Bridge is still almost half a year away. On the AMD side of the chip, to be candid, unless Bulldozer improves substantially with upcoming revisions and/or more capable Llano APUs are released, we don't expect AMD to bring anything particularly exciting to the midrange desktop processor segment for a while, either. Trinity is currently scheduled for Q2'2012, putting it in the same time frame as Ivy Bridge. 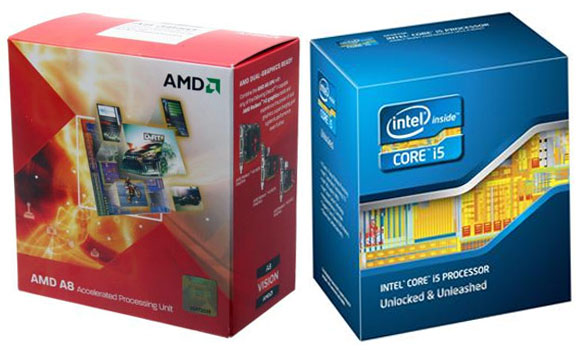 Over the next three pages we'll cover an $800 AMD Llano APU system aimed at casual gamers and general computer users, a $1000 Intel Core i5-2500K rig designed for enthusiast gamers who also use their PCs more intensively, and a $1200 Intel Core i7-2600K box geared towards folks who use their systems for computationally demanding tasks.