The NAS market has grown by leaps and bounds in the last few years, but the hard drive shortage resulted in a weak Q4 for the NAS industry as a whole. However, that didn't stop Synology from making refreshes to their hardware lineup as well as the Disk Station Manager (DSM) operating system.

The hardware refresh consists of a 5-bay and a 8-bay solution, with the 8-bay solution also capable of supporting two DX510 expansion units. The interesting aspect is that Synology has had 8-bay configurations only in the Rack Station lineup so far, and this is the appearance of the first Disk Station model with as many bays. Along with the expansion units, the user can have as many as 18 drives in the configuration. Synology didn't comment on the exact hardware beneath the two new solutions citing NDA concerns, but did own up that an Intel x86 CPU was under the hood. We will have more information about the hardware refresh (including the model numbers) after the official announcement comes out.

The DSM 4.0 refresh is much more interesting. The UI has been revamped a little bit, and it now looks more and more like a real OS running on the desktop. However, the killer feature is the newly added CloudStation. In a nutshell, it allows a folder to be specified on the NAS and linked to another folder on one or more PCs capable of accessing the unit. CloudStation then sets up a sync mechanism in such a way that changes to the contents on one machine are automatically reflected in the NAS as well as the other PCs syncing that folder. 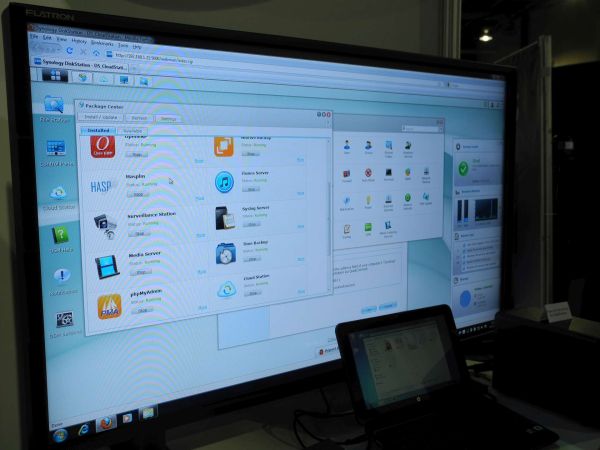 It is quite obvious that the Dropbox model has caught the fancy of many users for its ease of use and practical applications. Synology has rightly caught on to this trend and enabled a private Dropbox solution. CloudStation is still in beta phase (keeping track of the change history, reverting to previous versions and other similar aspects are still being worked on), but there is a lot of potential in this type of NAS feature. I am also quite sure we will be seeing more and more NAS vendors developing their own version of CloudStation. The new DSM also has the ClamAV antivirus as an add-on package (similar to the antivirus feature available in QNAP's Turbo NAS FW v3.5). The new DSM is not available for public download yet (i.e, not without registering and requesting a beta copy), but it can be installed on all 2008 models and later based on the Intel x86 platform.