Gaming notebooks are increasing in popularity, but getting affordable gaming hardware can still be a challenging task. While midrange parts like NVIDIA's GeForce GT 740M and 750M or AMD's Radeon HD 8600M line aren't bad options and will definitely do the job in a pinch, having a good gaming experience generally requires more muscle. Whether you want to boost minimum framerates for smoother play or just turn on all the bells and whistles, a strong GPU is critical. Unfortunately, a strong GPU also costs money.

MSI introduced its first-generation GX60 gaming notebook some time towards the end of last year as a way to bridge the gap. If you were willing to take a hit in CPU performance by using a Trinity-based AMD A10-4600M, you could be served by a very powerful AMD Radeon HD 7970M on the graphics side. Budget gamers on the desktop will often cut CPU budget if it means getting a faster graphics card, and that's the principle MSI is operating off of. 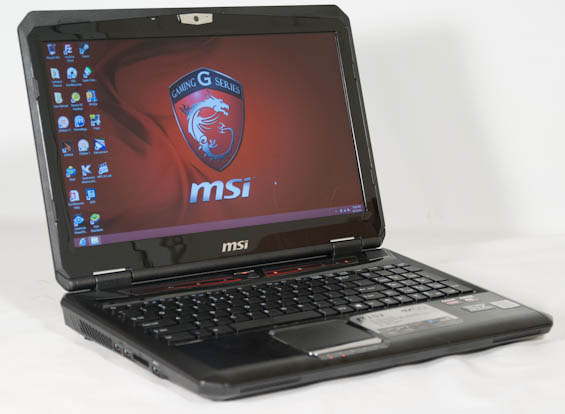 The fly in the ointment is that the gaming landscape has changed substantially since the first GX60. Games like Far Cry 3, Crysis 3, and Tomb Raider are all true next generation titles, requiring a healthy amount of CPU horsepower along with their substantial graphics requirements. As we saw in the first part of our review of the AMD A10-5750M, AMD has made some headway in CPU performance compared to last generation's Trinity chips, but we're still dealing with fundamentally the same silicon.

As far as mobile AMD chips go, the A10-5750M is about as fast as it gets. Trinity and Richland did away with the 45W parts you could find in the Llano generation, so we're essentially hoping that the pair of Piledriver modules running at a 2.5GHz nominal clock speed can pick up enough slack to power the AMD Radeon HD 7970M.

Where I'm a bit frustrated with the MSI GX60 is in both the memory configuration and the storage configuration. All told this is basically a smaller version of the GT70 chassis, less the backlit keyboard, but MSI opted to only include one DIMM instead of two for the memory, and we're stuck with a mechanical hard disk for storage duties. Thankfully you can get the GX60 for $1,199, which is a pretty good deal for a system with such a powerful GPU at its heart, and that does take some of the edge off.

Since the first part of the Richland review focused on the AMD A10-A5750M with dual-channel memory enabled, we have an opportunity now to compare those CPU results to the stock results of the GX60, which runs in only single-channel mode.