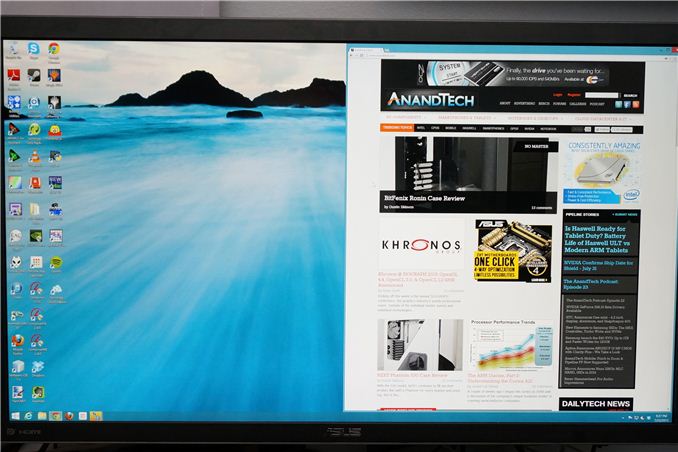 Many consider me to be a 4K hater. The past few trade shows I’ve attended have been pushing it on consumers to replace their TVs, but I see less value in it. When it comes to a computer display, it is a different game. Unlike a 50” TV, we sit close to our monitors, even if they are 30” in size. We also have no worries about a lack of native content, since everything is rendered on the fly and native. There are no issues with the lack of HDMI 2.0, as DisplayPort 1.2 can drive a 3840x2160 screen at 60 Hz.

When it comes to 4K on the desktop, my main question is: how much difference will I see? ASUS is one of the first with a HiDPI display in the PQ321Q. While not truly 4K, it is a 3840x2160 LCD display that can accept an Ultra High Definition (UHD) signal over HDMI and DisplayPort. It also clocks in at a wallet-stretching $3,500 right now. The question is, are we seeing the future with displays here, or are we seeing a niche product?

What does 4K/UHD/HiDPI bring to the desktop? We’ve seen it for a few years now in smartphones and tablets, making their smaller screens more usable for reading and general work. My initial thought is more desktop space, as that is what it has meant before. With a 32” monitor and a pixel density this high, running it without any DPI scaling leads to a desktop where reading text is a huge pain. Instead I believe most users will opt for DPI scaling so elements are larger and easier to read. Now you have something similar to the Retina screen on the iPhone: No more desktop space compared to a 2560x1440 monitor, but one that is razor sharp and easier to look at.

To get to this pixel density, ASUS has relied upon a panel from Sharp that uses IGZO technology. IGZO (Indium gallium zinc oxide) is a material that replaces amorphous silicon for the active layer of an LCD screen. The main benefit is higher electron mobility that allows for faster reacting, smaller pixels. We have seen non-IGZO panels in smartphones with higher pixel densities, but we don’t have any other current desktop LCDs that offer a higher pixel density than this ASUS display. IGZO also allows for a wide viewing angle.

ASUS has packed this LCD into an LED edge-lit display that only extends to 35mm thick at the maximum. Getting to that thinness requires a power brick instead of an internal power supply, which is a trade-off I’d rather not see. The 35mm depth is very nice, but unlike a TV most people don’t mount a desktop LCD to the wall so I’d take the bulk to avoid the heavy power brick. It does lead to a cooler display, as even after being on for two consecutive days the PQ321Q remains relatively cool to the touch. The power brick itself is quite warm after that period.

Unlike most ASUS displays that click into their stand, the PQ321Q is screwed in with four small screws. This seems to be another attempt to cut down on the thickness of the display, as that mounting mechanism takes up space, but I like the quick release that it offers. Inputs are provided by a single DisplayPort and a pair of HDMI 1.4a inputs. In a nice touch these inputs are side mounted, instead of bottom mounted, making It easy to access them.

Be aware that HDMI 1.4a is really not designed around UHD/4K resolutions, and so your maximum frame rate is only 30p. If you’re watching a 24p film it won’t matter, but there is no real source for those right now anyway. HDMI 2.0 is supposed to resolve this issue, but that was promised at CES this year, and I think we’ll be lucky to see it at CEDIA in September.

One area that the ASUS falls a bit short in is the On Screen Display (OSD). While clear and fairly easy to work in, it takes up most of the screen and you can’t resize it or reposition it. Moving to 4K might have required a new OSD to be developed and it just isn’t totally refined yet, but it needs some work. It isn’t awful as it’s easy to work in, and offers a user mode with a two-point white balance, but it isn’t at the top of the game.

The full specs for the ASUS are listed below. Once this beast is unboxed, lets set it up.

Setup and Daily Use
Tweet
PRINT THIS ARTICLE
Comments Locked