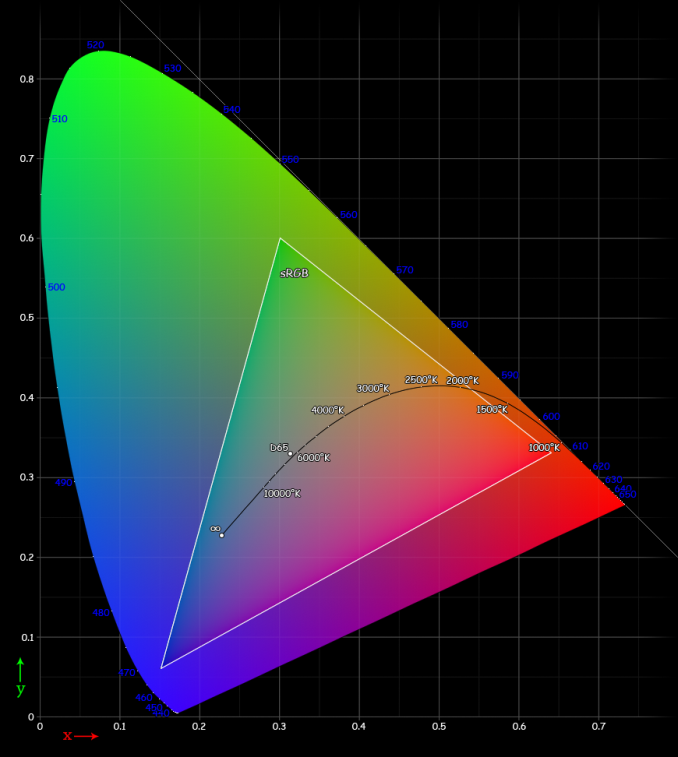 Post-MWC, with the launch of at least two of the major high-end flagships in the smartphone space, the basics are becoming increasingly easier to get from OEMs like high DPI displays, the latest SoC, and a plethora of RAM. Therefore, other pieces of the smartphone become increasingly important. One of the most misunderstood parts of the smartphone is a display’s accuracy. Much of this can be chalked up to a lack of existing literature on the subject when it comes to smartphone display quality, which made it easy for subjective evaluation to be the rule.

Of course, even in the PC display space, good displays were incredibly rare because of the race to the bottom for cost. Because reviewers simply didn’t highlight display quality/calibration quality in any objective manner, PC OEMs could cut costs by not calibrating displays and using cheaper panels because people adapted to the color, whether it was accurate or not. The end result was that the early days of the smartphone display race were filled with misinformation, and it has only been recently that smartphone OEMs have started to prioritize more than just contrast and resolution.

Perhaps one of the greatest misconceptions in evaluating display quality is gamut. Many people associate larger gamut with better display quality, but taking this logic to the extreme results in extremely unrealistic colors. The truth, as always, lies somewhere in between. Too large or too small of a gamut makes for inaccurate color reproduction. This is where a great deal of the complexity lies, as many people can be confused as to why too large of a display gamut is a bad thing. This certainly isn't helped by marketing, which pushes the idea of greater gamut equating to better display quality. The most important fact to remember is that all of the mobile OSes are not aware of color space at all. There is no true color management system, so the color displayed is solely based upon a percentage of the maximum saturation that the display exposes to the OS. For a 24-bit color display, this is a range of 0-255 for each of the RGB subpixels. Thus, 255 for all three color channels will yield white, and 0 on all three color channels yields black, and all the combinations of color in between will give the familiar 16.7 million colors value that is cited for a 24-bit display. It's important to note that color depth and color gamut are independent. Color gamut refers to the range of colors that can be displayed, color depth refers to the number of gradations in color that can be displayed.

Reading carefully, it’s obvious that at no point in the past paragraph is there any reference to the distribution of said colors. This is a huge problem, because displays can have differing peaks for red, green, and blue. This can cause strange effects, as what appears to be pure blue on one display can be a cyan or turquoise on another display. That’s where standards come in, and that’s why quality of calibration can distinguish one display from another. For mobile displays and PC displays, the standard gamut is sRGB. While there’s plenty to be said of wider color gamuts such as Adobe RGB and Rec. 2020’s color space standards for UHDTV, the vast majority of content simply isn’t made for such wide gamuts. Almost everything assumes sRGB due to its sheer ubiquity.

While it may seem that a display with color gamut larger than sRGB would simply mean that sRGB colors were covered without oversaturation, the OS’ lack of colorspace awareness means that this isn’t true. Because the display is simply given commands for color from 0 to 255, the resulting image would have an extra saturation effect. Assuming that the saturation curve from 0 to 255 is linear, not a single color in the image would actually be the original color intended within the color space, and that’s true even within the color space. This is best exemplified by the saturation sweep test as seen below. Despite the relatively even spacing, many of the saturations aren't correct for a target color space. 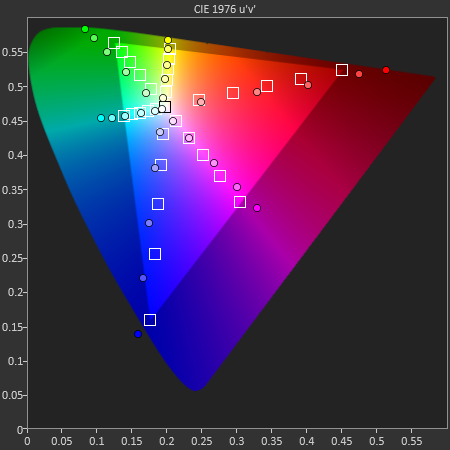 On the flip side, another issue is when the display is constrained to sRGB, but the OEM applies a compression of saturation at the high end to try and make the colors "pop", even though it too reduces color accuracy of the display, as seen below on all but the magenta saturation sweep. 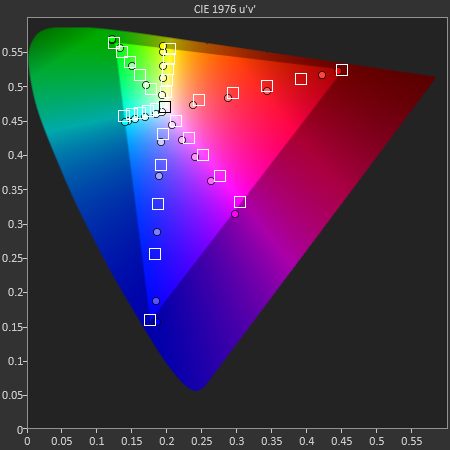 Ultimately, such quibbles over color gamut and the resultant color accuracy of the display may not be able to override the dominant discourse of subjectively evaluated color in a display, and many people prefer the look of an oversaturated display to that of a properly calibrated one. But within the debates that will undoubtedly take place over such a subject, it is crucial to keep in mind that regardless of personal opinion on display colors, color accuracy is a quantitative, objective analysis of display quality. While subjectively, one may prefer a display that has a color gamut larger than sRGB, objectively, such a display isn't accurate. Of course, including a vivid display profile isn't a problem, but there should always be a display profile that makes for accurate color.