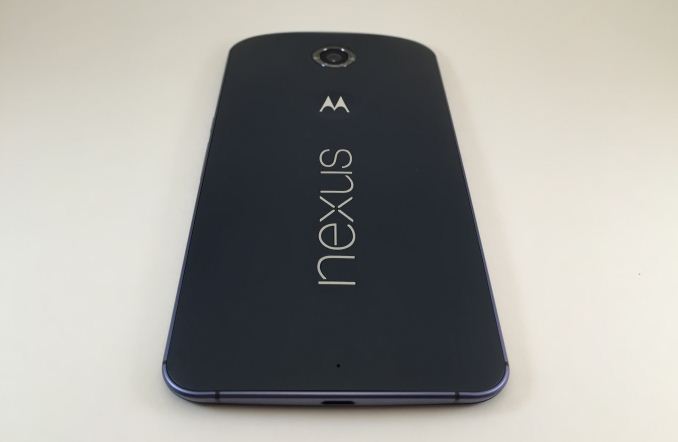 When consumers think of Google's Nexus devices, they think about the promise of receiving the latest updates for Android essentially as soon as they release. They also think about the value proposition that Nexus devices provide by giving good hardware at a price significantly lower than other smartphones. However, this was not always the case. The Nexus One, Nexus S, and Galaxy Nexus were all priced at the same level as other flagship smartphones. It was only with the launch of the Nexus 7 at $199 that we began to see a trend of inexpensive but still high quality devices coming from Google. That hasn't changed at all in the past few weeks. The Nexus 5 and Nexus 7 are both still available, and they still provide a very high quality experience, arguably better than some other smartphones that are both newer and more expensive. But Google's newest devices take aim directly at other flagship devices with both their specs and their prices. At $399 the Nexus 9 positions itself against Apple's iPad Mini 3, while the Nexus 6 at $649 goes up against essentially every other flagship smartphone.

On paper the Nexus 6 doesn't really bring much to the table that sets it high above the competition. This is a consequence of it launching so late into the year, with other companies having already released their new flagship devices. That being said, how a device looks on paper does not translate into how good it is in actual use. There are lots of cases of powerful phones that disappoint, and phones that are weak on paper that end up being surprisingly good. It's still helpful to know what hardware you're dealing with, so I've laid out the specifications of the Nexus 6 below, along with the Nexus 5 as a point of reference.

The design of the Nexus 6 is interesting in how it differs from all other Nexus devices, including the Nexus 9. Although the Nexus 9 launched alongside the 6 and is manufactured by HTC, it retains the slightly slanted flat sides and back cover design from the Nexus 5 which is made by LG. The Nexus 6 is made by Motorola, and it follows the style of design that we've seen on their other devices. The back of the device is heavily curved, with a plastic cover that meets a contoured aluminum frame which slopes downward at the top to accommodate the 3.5mm headphone jack and SIM card tray. Both the plastic back and the aluminum sides feel good in the hand, but due to the sheer size of the device your hand tends to rest more on the back cover instead of arching over it, so it doesn't quite have the premium feel of metal devices like the HTC One (M8) and the iPhone 6. Anyone looking to upgrade from the Nexus 5 should also know that the back cover does not have a soft touch finish like the black Nexus 5, and instead has the slightly rougher eggshell feel of the white Nexus 5. 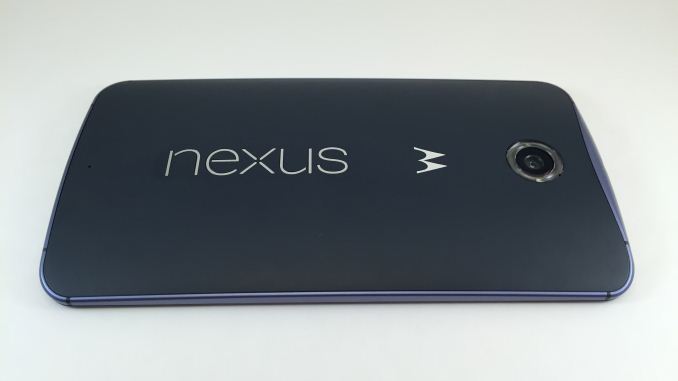 Like always, the back of the device displays the word Nexus in all lowercase characters, and the manufacturing partner's logo which in this case is the slightly indented Motorola logo that appears on all of their other smartphones. Above that is the 13MP camera which is surrounded by a plastic ring that houses the two LED camera flashes. Unlike previous Nexus devices, the camera on the Nexus 6 is aligned in the center rather than being put in one of the upper corners.

The volume rocker and power button on the Nexus 6 are both on the right side of the device, and are placed close to the center of that side so they can be easily used even with the phone being so large. The power button is also textured with a series of small lines so that it can be easily distinguished from the volume rocker. While I had no issues finding the power button, I often found myself pressing the wrong half of the volume rocker which is very slippery and made of a single piece of ceramic. In general I've always preferred having separate volume buttons and the Nexus 6 is no exception. 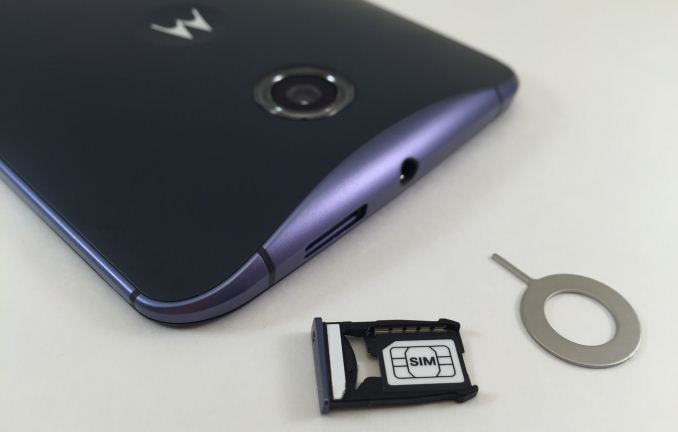 For some reason one of the parts I found myself really liking about the Nexus 6 is its nanoSIM tray and tray ejector tool. The tray has a much better design than other devices like the iPhone, HTC One, or Nexus 5 which are essentially just a metal frame that you place the SIM into with no mechanism to hold it in. The tray on the Nexus 6 has tiny notches that hold the SIM in place once it has been inserted, so that it doesn't shift or fall out. It's also fitted very well to the bezel of the device, with no misalignment or fitting issues which were both complaints about the SIM tray on early Nexus 5 units. The ejector is also small and fits well on a keychain which I appreciate, as I like to have one with me in case my primary phone's battery dies. 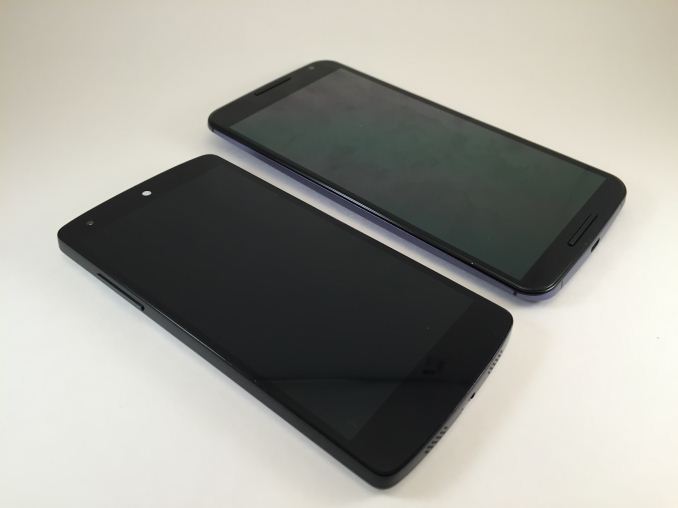 The front of the device is dominated by the large display, with minimal bezel on the top and bottom to include the stereo speakers and front facing camera. Compared to the Nexus 5, the Nexus 6 is thicker and taller, but the curved back and smaller top and bottom bezels help to alleviate that. The increase in width is the most noticeable change from the Nexus 5. The Nexus 6 is a massive smartphone, and its size makes it a firmly two handed device. Of course, that's the point of the device. Having a large display allows you to display more content on the screen and creates a more immersive experience when viewing videos and playing games. It's a larger device than the Nexus 5 because it's meant to offer a different experience. Compared to other phablets like the iPhone 6 Plus and Galaxy Note 4 the Nexus 6 is somewhat more difficult to hold, but not to the extent that I would say it poses an issue.

The comparison to the Nexus 5 is also interesting because Google is still selling the device, and so one could argue that the Nexus 6 is merely an addition to Google's lineup rather than a replacement. While this is a fair point to make, it doesn't address how users who prefer the smaller size of the Nexus 5 are also stuck with an ageing hardware platform. In the end there are always going to be tradeoffs to any device, and a buyer must consider how well a device fits the tasks they want to perform with it.