AMD's Hammer in Action: The most impressive demo of IDF

Intel has had a great IDF thus far; the attendance is great, the products are innovative and honestly it's an exciting time to be involved with the tech industry. The first developer forum of 2002 is testament to the fact that even when companies are hurting financially and the sun doesn't seem to shine just as bright as it used to, engineering and innovation will prevail. After all, it's a love for this sort of technology that attracted most of the brightest minds in this industry to the sector in the first place. 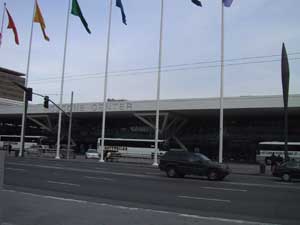 In spite of all of that and in spite of the excellent keynote speech by Craig Barrett, the one thing that has been lacking from this year's IDF are the hard hitting product demonstrations that we're used to. Where's the air-cooled 4GHz Pentium 4? Where's the talk of the Pentium 4's successor? While IDF week is only halfway over, there has been a lack of some of the cool demos that we're used to seeing at these things - until we visited AMD.

As you've undoubtedly heard, AMD has announced that they have a working version of their upcoming Claw Hammer processor. Not only did we get a chance to see it running two different operating systems, but we actually got to hold the CPU (how geeky can we get?) and take a look at AMD's first reference board based on the AMD-8000 chipset.