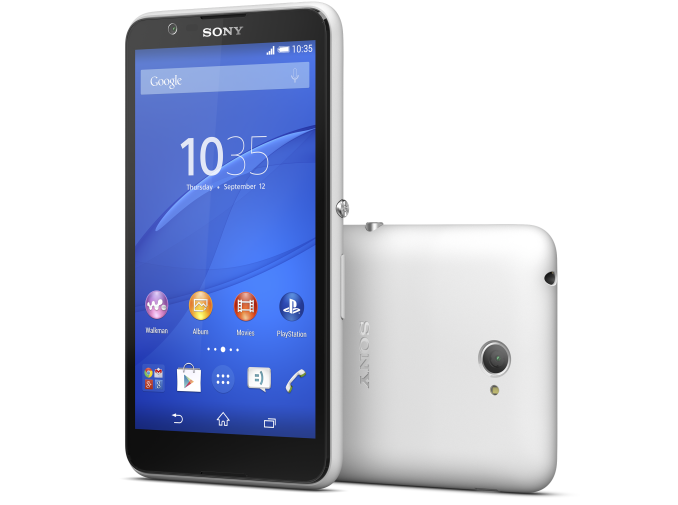 Sony has two fairly well defined lines of smartphones. Their Xperia Z smartphones and tablets represent their flagship Android devices, while their Xperia E line targets a more budget oriented market. Sony launched their Xperia E3 in September of last year, around the same time as the announcement of the Xperia Z3. Now, not even six months later, Sony is announcing the successor to the Xperia E3, the E4. From a purely aesthetic point of view, the Xperia E4 is larger and thicker than the E3, but has significantly smaller bezels surround the display. This means that the size of the device does not increase as much as one would expect from a shift to a 5" display from a 4.5" one. Moving past aesthetics, the specifications of the Xperia E4 have been laid out below.

On the back of the device we have a 5MP camera, and on the front we have a 2MP camera. The front is also home to a 5" 960x540 IPS display. Sony's effort to put in an IPS panel is definitely appreciated, but in 2015 a display with a pixel density of 220pi may be a hard sell when there's competition from devices like the Motorola Moto G with smaller display sizes and higher resolution. However, this again comes down to pricing. If Sony prices the Xperia E4 accordingly, then they should have no trouble making sales in their target market.

On the connectivity side, there's no LTE support to be seen. Network speeds max out at 21.1Mbps downstream and 5.76Mbps upstream on HSPA. There is support for Bluetooth 4.1, but WiFi connectivity is limited to 2.4GHz 802.11n. Like many mid-range devices, the Xperia E4 will come in a dual-SIM variant in certain markets where that feature is desired.

The Xperia E4 will be launching later this month in certain markets. There's currently no word on pricing or availability in North America.