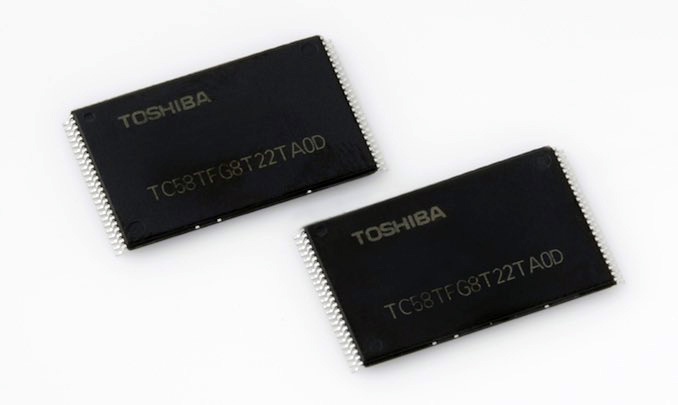 This week Toshiba and SanDisk are announcing a new milestone in their joint development of flash memory. Back in March Toshiba announced a 48-layer 3D NAND technology that they were sampling in the form of a 128Gb MLC die. Now Toshiba and partner SanDisk have built a 256Gb TLC die on their 48-layer process. Toshiba will be sampling that chip starting in September, and SanDisk has selected it as their first 3D NAND device for mass production.

Central to this development is the outfitting of Fab 2 at their facility in Yokkaichi, Japan. The previous Fab 2 was demolished in 2014 and construction started on a replacement to be used as their first fab for 3D NAND. The new Fab 2 has now started pilot production of 3D NAND as it is being readied for mass production, scheduled to begin in 2016. Toshiba says the fab will be completed in the first half of the year and SanDisk plans to be shipping products using their 3D NAND by the end of the year.

The new 3D NAND will face experienced competition from Samsung who are currently shipping 32-layer 3D NAND in capacities up to 128Gb for both MLC and TLC configurations. Samsung has also announced its third generation V-NAND which should be starting mass production in the latter half of this year. Meanwhile, Intel and Micron have stated that their 32-layer 3D NAND will be in mass production by the fourth quarter of this year in the form of a 256Gb MLC die and a 384Gb TLC die. SK Hynix is to begin mass production of a 36-layer 128Gb MLC die during the third quarter and is working toward a 48-layer TLC that will be available in 2016.

All of the major flash manufacturers have now publicized their plans for introducing 3D NAND. Planar NAND won't be disappearing overnight or even in a year, as it takes a lot of time and money to convert a fab to a new process. But from here on out, we can expect all the most interesting news about NAND flash memory to be about 3D.