Itanium - is there light at the end of the tunnel?

On HP's website, these prophetic words are hidden, but can still be found:

"EPIC is the old term for what is now known as the ItaniumTM processor family architecture, co-developed by HP and Intel®. This design philosophy will one day replace RISC and CISC. It is a gateway into the 64-bit future but it still remains completely 32-bit compatible."

These sentences showed how bullish HP and Intel were a few years ago about their new creation. But in 2005, the reality is somewhat different:

"Dell will phase out its remaining computer based on Intel's Itanium microprocessor, in another sign of the waning interest in a chip that cost an estimated several billion dollars to develop." The Wall Street Journal, September 15th 2005.

While it is hardly news that Dell, who doesn't believe in "big iron" anyway, is dropping Itanium, the rest of the sentences that the WSJ journalist wrote down seem to spell doom.

As the Itanium market is still limited to HPC and (ultra) high-end servers, Microsoft is losing interest in the Itanium. IA 64 versions of Longhorn are low priority and only the future of the High Performance Computing version for Itanium seems certain. Visual Studio 2005 does not even support the Itanium platform. Dell and IBM are no longer interested. It is not going too well for Itanium.

A few years ago, analysts predicted doom for Sun; not completely without reason, as the Intel Itanium 2 and IBM Power 5 clearly wipe the floor performance-wise with the UltraSparc CPUs. However, Sun's revenge is very sweet. Sun's newest Galaxy servers with up to 16 Opteron cores are a very competitive platform for the expensive Itanium servers. The Galaxy servers are well suited for clustering, so even in the market niche that requires more than 16 CPUs, are the Itanium based machines threatened by a cheaper alternative?

Although the AMD Opteron targets a different market than the Intel Itanium, the Opteron market is expanding towards the high end, thanks to Sun, which in turn forces Intel to expand the feature set of the Xeon. Back in 2004 when EM64T was introduced, Intel pointed out that EM64T was only introduced on the Xeon DP. Intel probably expected the Opteron to be limited to workstations and entry level servers. However, the Opteron was very successful in the quad CPU market, and then it entered the 8-way and 16-way CPU market too. Intel had no choice then to counter attack and equip the Xeon MP with EMT64 and much higher clockspeeds than before the Opteron era, better RAS features and massive (for x86) L3 caches, up to 8MB big.

Is Itanium nothing more than over an ambitious project that resulted in a CPU of titanic proportions? In this article, we try to answer the question of whether or not the EPIC CPU has a bright future ahead. To answer that question, we'll focus on the technical advantages and disadvantages of the chip, and look ahead to see if the architecture can still grow enough to outpace the competition.


The End of a Generation

Indeed, you might ask yourself, why do we even bother writing articles about Itanium? It is, after all, a massive CPU that ends up in very expensive machines, mostly huge database servers and HPC machines for scientific purposes; machines that most of us will never consider buying, not even for business purposes. 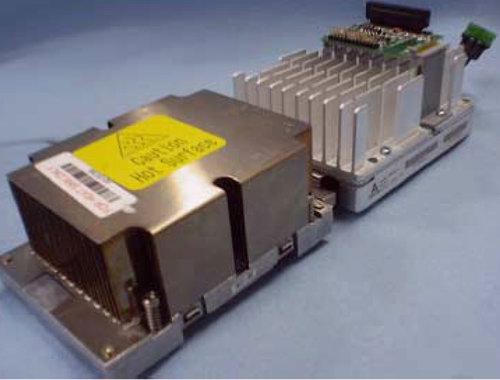 Sturdy heatsinks for the Itanium

And Itanium is in a lot of trouble. The newest generation, Montecito, was projected to arrive in 2004 when Intel first mentioned it. Then the PowerPoint slides mentioned 2005, and it became clear now that the newest Itanium wouldn't make its appearance before mid-2006. Many people feel that this is one of the many signs that the "Itanic" is sinking slowly, but steadily.

Still, despite its rather dull reputation of a big iron CPU, and the flood of negative predictions, the EPIC has something fascinating. From a purely technical and academic point of view - completely ignoring the economical and business logic - there are some strong indications that time may well be on the side of the EPIC CPU despite all doom scenarios. That might sound insane right now, but allow me to explain this statement.

As we stated in the "The Quest for More Processing Power, Part One", the CPU performance increase that we enjoyed during the golden era of the PC from 1981 to 2002 has hit the brakes, and is decreasing quickly. Back in the nineties, Intel and others introduced techniques like superscalar wide issue, out of order execution with big reorder buffers, speculative execution, integrated L2-caches, register renaming and dynamic branch prediction, which all increased the number of instructions that could be processed per cycle (IPC) on average. The AMD Athlon, which was introduced in 1999, and the Thunderbird incarnation in 2000 could be considered as the last representatives of this superscalar generation. Macro ops fusion, introduced in the Athlon, where two operations are travelling down the pipeline together until they get separated to get executed, was one of the last major tricks of this generation.

Since then, only one improvement has really pushed performance per cycle forward: the on die memory controller (ODMC). Sure, there have been other "little tricks" that have steadily improved performance, but nothing spectacular. The CPU engineers still have a few tricks upon their sleeves that can improve IPC somewhat, but are limited to those that do not increase leakage and dynamic power loss. The focus is no longer on IPC or Instruction Level Parallelism (ILP). It is on Thread Level Parallelism (TLP).

At Spring IDF 2005, when Anand, Derek and I asked Justin Rattner what Intel is doing in the field of even more advanced Branch prediction, he smiled. He told us that the current team who works on branch prediction is very small...around one person.

There is no doubt that the whole industry has shifted their focus away from ramping clock speed and improving ILP to increasing performance by exploiting TLP. So, how does this affect Itanium and its EPIC foundation? Before we answer that, let us quickly review the basics behind the Itanium/EPIC philosophy.