At the bottom of the price and performance ladder - and we recognize that we have overlapped the motherboard market here - we have the integrated graphics solutions. If you are really interested in gaming performance, the simple fact of the matter is that none of the IGP offerings are going to be sufficient to run all of the latest games at reasonable frame rates. In some cases, reducing the graphics quality and lowering the resolutions will make games playable, but there are quite a few titles available that won't run acceptably without a discrete graphics card. If you don't really need to play all of the latest and greatest games, or if you don't play games at all, these IGP solutions should be sufficient. Some of the IGP motherboards can also work very well inside an HTPC, if that's something you're interested in.

When looking at IGP solutions, the added cost on the motherboard relative to a non-IGP solution is usually going to be less than $15, and in some cases IGP is essentially free. That provides tremendous bang for the buck, as long as you don't need a lot of "bang". IGP is also the only area where Intel, SIS, and VIA have some reasonable GPU offerings. Before we discuss the various IGP offerings, though, there are a few things to keep in mind. First, the feature set on a lot of motherboards that have IGP is much more limited than what you find on competing motherboards, including typically far worse overclocking results. That won't be a problem for many people - and certainly not for businesses - but if you want to run a modern LCD with a DVI connection (which is preferred for LCDs where possible) there are very few motherboards that have integrated DVI ports. Finally, even though IGP solutions are frequently based off of discrete graphics chips, performance will almost always be lower because the graphics have to share memory bandwidth with the CPU and other devices, and the integrated GPUs are often designed to be lower performing parts.

Starting with the IGP offerings for Intel platforms, and going with the assumption that you want to run a Core 2 Duo processor, we have a few options available. Intel's original intention was that you would have to upgrade to a G965/Q965 chipset motherboard for Core 2 Duo support, but with the cheapest of these motherboards starting at over $100, vendors began to look for alternate solutions. You can find a few 865G boards with Core 2 Duo support, which would also provide you with an AGP slot for upgrading, but if you want to use an AGP card you probably don't need IGP in the first place. There are quite a few boards with the 945G chipset available for less than $100, and while 945G is one of the slower integrated solutions it is still capable of running Windows Vista's Aero Glass interface. The G965/Q965 motherboards are supposed to offer a better feature set than 945G, but while that may be true on paper they haven't shown themselves to be much faster (if at all) relative to competing solutions so far. Updated drivers from Intel continue to improve performance and compatibility, and we should finally get a driver that will make the G965's X3000 performed better than the 945G, but the 965 solutions should still be looked at more as a minimum level of graphics performance rather than something capable of running most recent games.

The only other currently available IGP solutions for Intel platforms come from VIA, and these are featured on some of the cheapest Core 2 Duo compatible motherboards available. Unfortunately, they once again focus more on AGP as an upgrade path rather than PCI-E, and the boards can be a bit more quirky and unstable. Still, if you need to purchase a Core 2 Duo CPU anyway, you might consider the $160 E6300 and ECS motherboard bundle, as you basically get the motherboard for free. In the near future, ATI should also begin shipping their RS600 chipset (ATI Xpress 1250) which will feature X700-level IGP performance - hopefully with full SM3.0 capability and 8 pixel pipelines, although the final features and availability date are not yet known. Taking a quick look at the available Intel platform motherboards with integrated graphics, we were unable to find any that come with a DVI port, but hopefully that will change when we begin to see Core 2 motherboards with ATI and NVIDIA IGP solutions - and we might even see HDMI ports on some boards, which would be great for HTPC systems.

On the AMD side of the fence, there are a couple of currently shipping IGP solutions that also offer better compatibility and performance than the Intel or VIA solutions. From AMD/ATI, the Radeon Xpress 1100/1150 chipsets are available with DirectX 9 support and performance similar to that of the X300 SE HyperMemory cards - note that Shader Model 3.0 support is not included. While we say that performance is similar to the X300 SE, they actually have half as many pipelines and have to share main memory bandwidth, making them less than half as fast as a discrete X300 card. These chipsets offer performance roughly equal to that of the NVIDIA 6100/6150, although the NVIDIA chipsets do offer SM3.0 support, giving them a slight advantage in terms of flexibility. SM3.0 games aren't going to run well on any IGP anyway, but potentially SM3.0 will be used for other work in Windows Vista (it's a stretch, I know...). Performance of the NVIDIA chipsets is similar to that of their GeForce 6200 TurboCache cards, but once again with half as many pipelines, making them clearly slower than just about any discrete graphics solution. If you're more interested in saving as much money as possible - and you're willing to risk stability and reliability concerns - you can also find motherboards with the SIS 761 and the VIA K8M800/K8M890 chipsets starting at around $50. 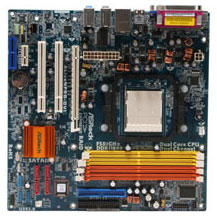 Unlike the Intel platform, we were actually able to find several motherboards with integrated graphics for socket AM2 that include DVI ports. The ASRock ALiveNF6G-DVI uses the nForce 6100 chipset and is available for around $73, and it actually puts the DVI port on an included expansion card that fits a special "HDMR" slot. The MSI K9AGM-FID includes the DVI port on the back panel and is the only AM2 solution with such a feature that uses the ATI Xpress 1150 chipset, priced at around $83. MSI (K9NBPM2-FID) and ASUS (M2NBP-VM CSM) both offer similar micro-ATX motherboards that use the NVIDIA Quadro NVS 210S chipset, both priced at $83 as well. Finally, ASUS (M2NPV-VM - $91), Abit (NF-M2 - $96), and DFI (C51PV-M2/G Infinity - $104) offer "micro-ATX" boards with DVI ports based off the nForce 6150 chipset. We put "micro-ATX" in quotation marks because the DFI board actually appears to be too large, as it is 10.4 inches wide rather than the standard 9.6 inches. 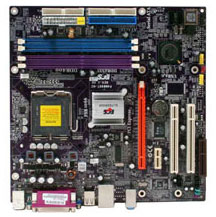 Out of all of these IGP motherboards we have listed there are a few picks that stand out. For the Core 2 Duo platform, if you're really looking to save some money, there's no beating the ECS + E6300 bundle currently available at Outpost.com. You can toss the motherboard and buy a better model in the future if necessary, as the board is basically a freebie. If you want a more current feature set, you can look at either the 945G or the G965 offerings, and although the latter will cost more the boards also come with somewhat improved IGP performance and in some cases much better overclocking. We aren't going to recommend any AGP boards other than the ECS, as we don't feel the ~$20 saved is worth the limited upgrade potential for the future, and of the remaining motherboards the ASUS P5L-MX (945G chipset - $83) gives good base performance and a moderate amount of overclocking (up to approximately 300-310 FSB) at a decent price. If you want IGP but you still want as much overclocking capability as possible, we would recommend the Gigabyte GA-965G-DS3, which costs quite a bit more at $141 but can still reach bus speeds of over 425 MHz. That might be the ideal solution for someone who wants to get the cheapest Core 2 Duo processor and overclock as much as possible, while not worrying about getting a discrete graphics card. Really, though, you could purchase a cheaper P965 motherboard and a $40 discrete graphics card and get the same level of CPU performance as well as faster graphics performance.

On the AM2 platform, we are inclined to go with one of the DVI capable motherboards we mentioned earlier, simply because just about everyone is switching to LCD monitors these days. If all you want is a system that will work well at stock clock speeds, you should simply go with the cheapest board in that list, the ASRock ALiveNF6G-DVI priced at around $73. For somewhat improved IGP performance as well as better overclocking options, there's no beating the Abit NF-M2, which should be able to reach a HyperTransport speed of at least 250 MHz for a 25% overclock. Currently going for around $96, it's a bit more expensive than other options, but the majority of IGP motherboards usually forget about overclocking, making this one of the only AM2 boards to cover that area.

In terms of graphics performance, just keep one thing in mind when considering an integrated solution: you get what you pay for. Even the fastest current IGP (nForce 6150 or ATI Xpress 1150) is going to be slower than the cheapest discrete ATI or NVIDIA graphics card. With such cards starting at under $50, you might be better off spending a bit less on a non-IGP motherboard and getting a more capable GPU instead.