Earlier this week NVIDIA announced their new top-end single-GPU consumer card, the GeForce GTX Titan. Built on NVIDIA’s GK110 and named after the same supercomputer that GK110 first powered, the GTX Titan is in many ways the apex of the Kepler family of GPUs first introduced nearly one year ago. With anywhere between 25% and 50% more resources than NVIDIA’s GeForce GTX 680, Titan is intended to be the ultimate single-GPU card for this generation.

Meanwhile with the launch of Titan NVIDIA has repositioned their traditional video card lineup to change who the ultimate video card will be chasing. With a price of $999 Titan is decidedly out of the price/performance race; Titan will be a luxury product, geared towards a mix of low-end compute customers and ultra-enthusiasts who can justify buying a luxury product to get their hands on a GK110 video card. So in many ways this is a different kind of launch than any other high performance consumer card that has come before it.

So where does that leave us? On Tuesday we could talk about Titan’s specifications, construction, architecture, and features. But the all-important performance data would be withheld another two days until today. So with Thursday finally upon us, let’s finish our look at Titan with our collected performance data and our analysis. 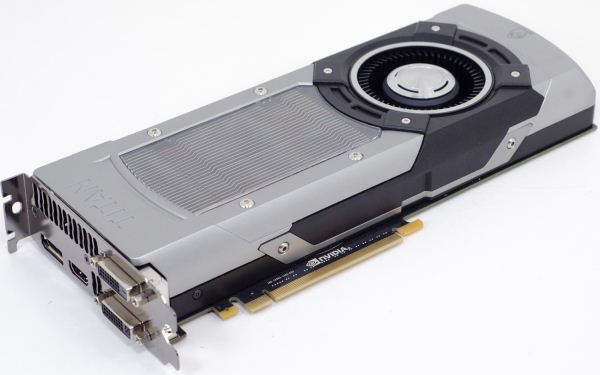 On paper, compared to GTX 680, Titan offers anywhere between a 25% and 50% increase in resource. At the starting end, Titan comes with 25% more ROP throughput, a combination of Titan’s 50% increase in ROP count and simultaneous decrease in clockspeeds relative to GTX 680. Shading and texturing performance meanwhile benefits even more from the expansion of the number of SMXes, from 8 to 14. And finally, Titan has a full 50% more memory bandwidth than GTX 680.

Setting aside the unique scenario of compute for a moment, this means that Titan will be between 25% and 50% faster than GTX 680 in GPU limited situations, depending on the game/application and its mix of resource usage. For an industry and userbase still trying to come to terms with the loss of nearly annual half-node jumps, this kind of performance jump on the same node is quite remarkable. At the same time it also sets expectations for how future products may unfold; one way to compensate for the loss of the rapid cadence in manufacturing nodes is to spread out the gains from a new node over multiple years, and this is essentially what we’ve seen with the Kepler family by launching GK104, and a year later GK110.

In any case, while Titan can improve gaming performance by up to 50%, NVIDIA has decided to release Titan as a luxury product with a price roughly 120% higher than the GTX 680. This means that Titan will not be positioned to push the price of NVIDIA’s current cards down, and in fact it’s priced right off the currently hyper-competitive price-performance curve that the GTX 680/670 and Radeon HD 7970GE/7970 currently occupy.

This setup isn’t unprecedented – the GTX 690 more or less created this precedent last May – but it means Titan is a very straightforward case of paying 120% more for 50% more performance; the last 10% always costs more. What this means is that the vast majority of gamers will simply be shut out from Titan at this price, but for those who can afford Titan’s $999 price tag NVIDIA believes they have put together a powerful card and a convincing case to pay for luxury.

So what can potential Titan buyers look forward to on the performance front? As always we’ll do a complete breakdown of performance in the following pages, but we wanted to open up this article with a quick summary of performance. So with that said, let’s take a look at some numbers.

Looking first at NVIDIA’s product line, Titan is anywhere between 33% and 54% faster than the GTX 680. In fact with the exception of Hitman: Absolution, a somewhat CPU-bound benchmark, Titan’s performance relative to the GTX 680 is actually very consistent at a narrow 45%-55% range. Titan and GTX 680 are of course based on the same fundamental Kepler architecture, so there haven’t been any fundamental architecture changes between the two; Titan is exactly what you’d expect out of a bigger Kepler GPU. At the same time this is made all the more interesting due to the fact that Titan’s real-world performance advantage of 45%-55% is so close to its peak theoretical performance advantage of 50%, indicating that Titan doesn’t lose much (if anything) in efficiency when scaled up, and that the games we’re testing today favor memory bandwidth and shader/texturing performance over ROP throughput.

Moving on, while Titan offers a very consistent performance advantage over the architecturally similar GTX 680, it’s quite a different story when compared to AMD’s fastest single-GPU product, the Radeon HD 7970 GHz Edition. As we’ve seen time and time again this generation, the difference in performance between AMD and NVIDIA GPUs not only varies with the test and settings, but dramatically so. As a result Titan is anywhere between being merely equal to the 7970GE to being nearly a generation ahead of it.

At the low-end of the scale we have DiRT: Showdown, where Titan’s lead is less than 3%. At the other end is Total War: Shogun 2, where Titan is a good 62% faster than the 7970GE. The average gain over the 7970GE is almost right in the middle at 34%, reflecting a mix of games where the two are close, the two are far, and the two are anywhere in between. With recent driver advancements having helped the 7970GE pull ahead of the GTX 680, NVIDIA had to work harder to take back their lead and to do so in an concrete manner.

Titan’s final competition are the dual-GPU cards of this generation, the GK104 based GTX 690, and the officially unofficial Tahiti based HD 7990 cards, which vary in specs but generally have just shy of the performance of a pair of 7970s. As we’ve seen in past generations, when it comes to raw performance one big GPU is no match for two smaller GPUs, and the same is true with Titan. For frames per second and nothing else, Titan cannot compete with those cards. But as we’ll see there are still some very good reasons for Titan’s existence, and areas Titan excels at that even two lesser GPUs cannot match.

None of this of course accounts for compute. Simply put, Titan stands alone in the compute world. As the first consumer GK110 GPU based video card there’s nothing quite like it. We’ll see why that is in our look at compute performance, but as far as the competitive landscape is concerned there’s not a lot to discuss here.