Off the back of Intel's announcement of its 10th generation Comet Lake vPro processors for the 400-series chipset, ASRock Industrial has announced some details about its incoming product stack. Aimed more towards the workstation and server market, it plans to release models on Intel's Q470E, H420E, and W480 chipsets. The stack includes a variety of different models with mini-ITX, micro-ATX, and ATX form factors all catered to. 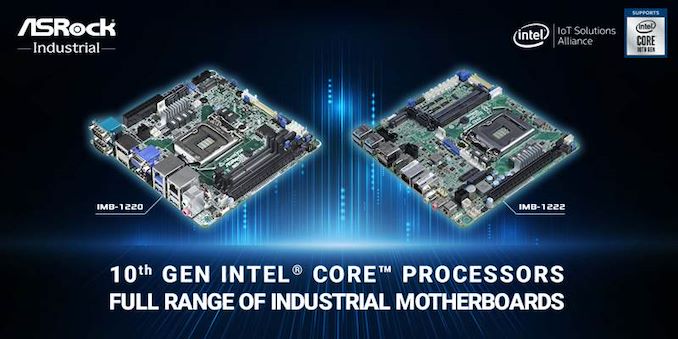 ASRock Industrial's 400-series mini-ITX models, which are designed to offer a lower-cost to the end-user, include the IMB-1220-L and IMB-1220-D. These are both based on the Q470 chipset and include two memory slots with support for up to 64 GB of DDR4-2933. Both of these models also include an Intel 2.5 G and Intel Gigabit Ethernet controller pairing designed for industrial application.

Also in the Q470E mini-ITX product stack is the IMB-1222 and IMB-1222-WV, which are thin mini-ITX models with reduced height IO. These also include support for 64 GB of DDR4-2933 memory. The ASRock Industrial IMB-1222 supports a 12 V power input, while the IMB-1222-WV has a 12-28 V DC-input for applications that require support for wider voltages.

Also announced but with no specifications is the IMB-1221-L and the IMB-1221-D, both of which are based on the H420E chipset.

ASRock Rack has also announced two micro-ATX models, the IMB-1313 based on Intel's Q470E chipset, while it also has a W480E variant, the IMB-X1313, which will likely have more premium features.

ASRock Industrial hasn't unveiled full specifications for its Q470E, H420E, or W480E embedded motherboards, nor has it revealed any information on pricing or availability.