For the past few Intel Developer Forum conferences the first day has always kicked off with some very impressive demonstrations. In years past we've seen the first air-cooled multi-GHz CPUs, we've had technologies like Hyper Threading introduced and we've had revelations about future CPUs like Banias. The first IDF of 2002 however started on a much different but well appreciated note. 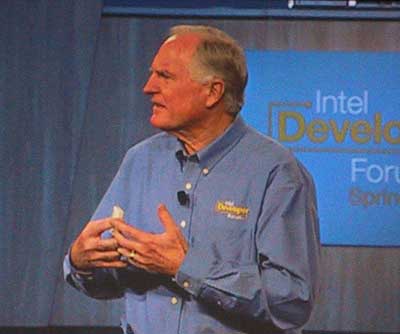 Intel's CEO Craig Barrett began the first day of IDF with his thoughts on the economy and honestly I can say that his attitude and opinions regarding the future of the technology market are right on the ball. It's clear that Barrett has the right mindset to lead Intel out of the tough times that all technology companies are facing - we need to "innovate our way out of this recession."

This year's Spring IDF is by far the largest I've ever attended, with over 4000 attendees and over 50 countries represented. This caused the venue to be moved down to the San Francisco Moscone Center instead of its usual habitat in San Jose.

But of course you all came to read about the interesting demonstrations and not about the economy, San Francisco or the beauty of wireless internet access hotspots so let's get to it.