What do a 3GHz Pentium 4, a digital camera and the Matrix 2 have in common?

The first demonstration was one to show off a couple of technologies including software by a company called Realviz. Realviz happens to be invested in by Intel and thus the presence of their technology at IDF requires no explanation. The technology that Realviz has developed allows for a form of image based content creation. 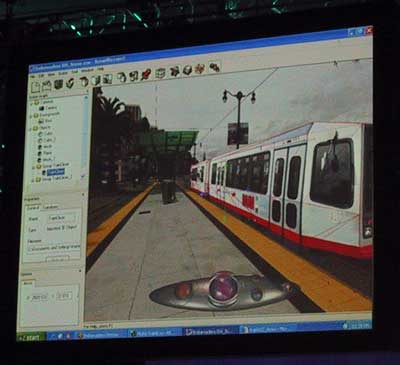 Using a digital still camera and the Realviz technology you are able to create a 3D world and 3D models from 2D digital still images. Imagine being able to take a bunch of pictures of an environment and stitch them together in a 3D world. This you'll know is already possible but the beauty of this demonstration was they actually created a 3D environment with actual 3D props also generated from 2D stills and made a movie out of them all. Using a few stills of Craig Barrett it was possible to create a fairly convincing 3D model of him on a snowboard tricking off of objects in a 3D world, all generated from digital stills. And of course all of this was done on an air-cooled 3GHz Pentium 4 processor.

This technology has apparently been licensed by Escape for use in some way with the upcoming sequel to the Matrix.

Some words on Technology

A quick video of Intel's D1C fab, the world's first 300nm - 0.13-micron manufacturing plant followed as we moved into the next demonstration.

Index Why would you need a 3GHz PC with 100Mbps Internet Access?
Tweet
PRINT THIS ARTICLE
Comments Locked