Why would you need a 3GHz PC with 100Mbps Internet Access?

The final demonstration of Craig Barrett's keynote involved finding a real-world use for a 3GHz Pentium 4 with a 100Mbps Internet connection. Mr. Barrett has been spending quite a bit of his time lobbying for the US government to actually take broadband seriously. The idea is to have 100Mbps broadband access to homes within the next decade but ideally as soon as possible. But what would you possibly use that kind of bandwidth for? 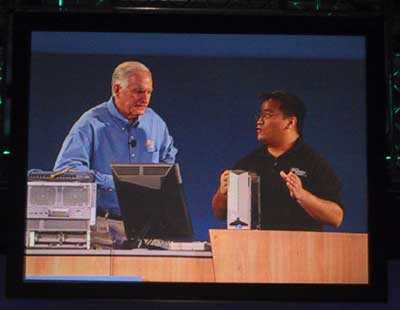 The system on the left was the Xeon server, on the right is the concept Pentium 4 3GHz PC w/ Hyper Threading enabled

This demonstration used a 3GHz Pentium 4 concept PC (air-cooled) with Hyper Threading enabled (even more support for the fact that whatever replaces the Pentium 4 on the desktop will support a future-generation of Hyper Threading). A separate Xeon server fed 1080i HDTV content to this desktop PC which had no hardware HDTV decoding capabilities. In fact, the server fed not only one but two HD streams to the concept desktop PC which together ate up approximately 20Mbps of bandwidth. This demonstration alone would pretty much max out a 2GHz Pentium 4 or Athlon XP 2000+ but ran smoothly on a Pentium 4 3GHz machine with no stuttering. 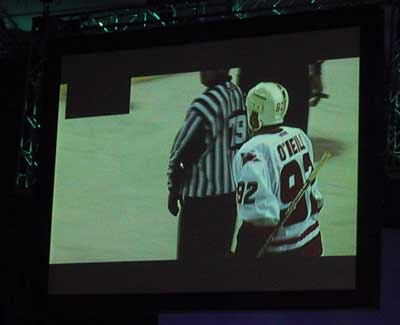 The demonstration pushed the limits one step further by adding a third HD stream and mapping all three streams onto a rotating cube, eating up a total of 60Mbps of bandwidth and making use of close to 100% of the 3GHz CPU. 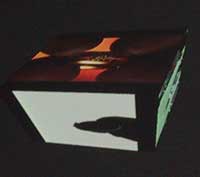 Once we all have 100Mbps Internet connections there will undoubtedly be other uses of that sort of bandwidth but HD streaming is going to be one of them. The types of Tivo and Replay TV devices that will be able to spawn given that type of internet access & CPU power will be impressive to say the least.

What do a 3GHz Pentium 4, a digital camera and the Matrix 2 have in common? Continued Support for Itanium
Tweet
PRINT THIS ARTICLE
Comments Locked